Twenty Years of Congress, Volume 2 From Lincoln to Garfield, with a Review of the Events Which Led to the Political Revolution of 1860 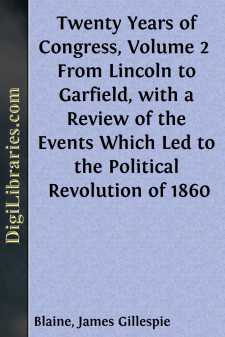 Abraham Lincoln expired at twenty-two minutes after seven o'clock on the morning of April 15, 1865. Three hours later, in the presence of all the members of the Cabinet except Mr. Seward who lay wounded and bleeding in his own home, the oath of office, as President of the United States, was administered to Andrew Johnson by Chief Justice Chase. The simple but impressive ceremony was performed in Mr. Johnson's lodgings at the Kirkwood Hotel; and besides the members of the Cabinet, who were present in their official character, those senators who had remained in Washington since the adjournment of Congress were called in as witnesses. While the death of Mr. Lincoln was still unknown to the majority of the citizens of the Republic, his successor was installed in office, and the administration of the Federal Government was radically changed. It was especially fortunate that the Vice-President was at the National Capital. He had arrived but five days before, and was intending to leave for his home in Tennessee within a few hours. His prompt investiture with the Chief Executive authority of the Nation preserved order, maintained law, and restored confidence to the people. With the defeat and disintegration of the armies of the Confederacy, and with the approaching disbandment of the armies of the Union, constant watchfulness was demanded of the National Executive. It is a striking tribute to the strength of the Constitution and of the Government that the orderly administration of affairs was not interrupted by a tragedy which in many countries might have been the signal for a bloody revolution.

The new President confronted grave responsibilities. The least reflecting among those who took part in the mighty struggle perceived that the duties devolved upon the Government by victory—if less exacting and less critical than those imposed by actual war—were more delicate in their nature, and required statesmanship of a different character. The problem of reconstructing the Union, and adapting its varied interests to its changed condition, demanded the highest administrative ability. Many of the questions involved were new, and, if only for that reason, perplexing. No experience of our own had established precedents; none in other countries afforded even close analogies. Rebellions and civil wars had, it is true, been frequent, but they had been chiefly among peoples consolidated under one government, ruled in all their affairs, domestic and external, by one central power. The overthrow of armed resistance in such cases was the end of trouble, and political society and public order were rapidly re-formed under the restraint which the triumphant authority was so easily able to impose.

A prompt adjustment after the manner of consolidated governments was not practicable under our Federal system. In the division of functions between the Nation and the State, those that reach and affect the citizen in his every-day life belong principally to the State. The tenure of land is guaranteed and regulated by State Law; the domestic relations of husband and wife, parent and child, guardian and ward, together with the entire educational system, are left exclusively to the same authority, as is also the preservation of the public peace by proper police-systems—the National Government intervening only on the call of the State when the State's power is found inadequate to the suppression of disorder....