Twenty Years of Congress, Vol. 1 From Lincoln to Garfield, with a Review of the Events Which Led to the Political Revolution of 1860 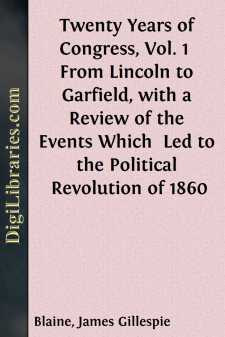 Original Compromises between the North and the South embodied in the Constitution.—Early Dissatisfaction with National Boundaries. —Acquisition of Louisiana from France by President Jefferson.— Bonaparte's Action and Motive in ceding Louisiana.—State of Louisiana admitted to the Union against Opposition in the North.— Agitation of the Slavery Question in Connection with the Admission of Missouri to the Union.—The Two Missouri Compromises of 1820 and 1821.—Origin and Development of the Abolition Party.—Struggle over the Right of Petition.

The compromises on the Slavery question, inserted in the Constitution, were among the essential conditions upon which the Federal Government was organized. If the African slave-trade had not been permitted to continue for twenty years, if it had not been conceded that three-fifths of the slaves should be counted in the apportionment of representatives in Congress, if it had not been agreed that fugitives from service should be returned to their owners, the Thirteen States would not have been able in 1787 "to form a more perfect union." These adjustments in the Constitution were effected after the Congress of the old Confederation had dedicated the entire North-west Territory to freedom. The ancient commonwealth of Virginia had, for the good of all, generously and patriotically surrendered her title to the great country north of the Ohio and east of the Mississippi, which to-day constitutes five prosperous and powerful States and a not inconsiderable portion of a sixth. This was the first territory of which the General Government had exclusive control, and the prompt prohibition of slavery therein by the Ordinance of 1787 is an important and significant fact. The anti-slavery restriction would doubtless have been applied to the territory south of the Ohio had the power existed to impose it. The founders of the government not only looked to the speedy extinction of slavery, but they especially abhorred the idea of a geographical line, with freedom decreed on one side, and slavery established on the other. But the territory south of the Ohio belonged to the Southern States of the Union,—Kentucky to Virginia; Tennessee to North Carolina; Alabama and Mississippi to Georgia, with certain co-extensive claims put forth by South Carolina. When cessions of this Southern territory were made to the General Government, the States owning it exacted in every case a stipulation that slavery should not be prohibited. It thus came to pass that the Ohio River was the dividing-line. North of it freedom was forever decreed. South of it slavery was firmly established. Within the limits of the Union as originally formed the slavery question had therefore been compromised, the common territory partitioned, and the Republic, half slave, half free, organized and sent forth upon its mission.

The Thirteen States whose independence had been acknowledged by George III., occupied with their outlying territories a vast area, exceeding in the aggregate eight hundred thousand square miles....