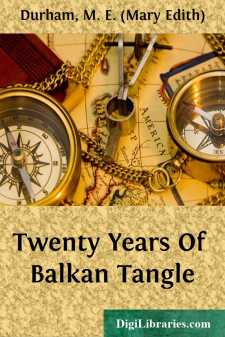 Add to My Favorites
Published: 10 years ago
Downloads: 82
Rating: (0 Votes)

TWENTY YEARS OF BALKAN TANGLE CHAPTER ONE PICKING UP THE THREADS

It was in Cetinje in August, 1900, that I first picked up a thread of the Balkan tangle, little thinking how deeply enmeshed I should later become, and still less how this tangle would ultimately affect the whole world. Chance, or the Fates, took me Near Eastward. Completely exhausted by constant attendance on an invalid relative, the future stretched before me as endless years of grey monotony, and escape seemed hopeless. The doctor who insisted upon my having two months' holiday every year was kinder than he knew. "Take them in quite a new place," he said. "Get right away no matter where, so long as the change is complete."

Along with a friend I boarded an Austrian Lloyd steamer at Trieste, and with high hopes but weakened health, started for the ports of the Eastern Adriatic.

Threading the maze of mauve islets set in that incomparably blue and dazzling sea; touching every day at ancient towns where strange tongues were spoken and yet stranger garments worn, I began to feel that life after all might be worth living and the fascination of the Near East took hold of me.

A British Consul, bound to Asia Minor, leaned over the bulwark and drew a long breath of satisfaction. "We are in the East!" he said. "Can't you smell it? I feel I am going home. You are in the East so soon as you cross Adria." He added tentatively: "People don't understand. When you go back to England they say, 'How glad you must be to get home!' They made me spend most of my leave on a house-boat on the Thames, and of all the infernal things. …

"You won't ever go back again now, will you?" he asked whimsically, after learning whence I came. "I must," said I, sadly. "Oh don't," said he; "tell them you can't, and just wander about the East." He transshipped shortly and disappeared, one of many passing travellers with whom one is for a few moments on common ground. Our voyage ended at Cattaro and there every one, Baedeker included, said it was correct to drive up to Cetinje. Then you could drive down next day and be able to say ever afterwards, "I have travelled in Montenegro."

It was in Cetinje that it was borne in on me that I had found the "quite new place" which I sought. Thus Fate led me to the Balkans.

Cetinje then was a mere red-roofed village conspicuous on the mountain-ringed plain. Its cottages were but one storeyed for the most part, and contained some three thousand inhabitants. One big building stood up on the left of the road as the traveller entered.

"No. That is not the palace of the Prince," said the driver. "It is the Austro-Hungarian Legation."

Austria had started the great Legation building competition which occupied the Great Powers for the next few years. Each Power strove to erect a mansion in proportion to the amount of "influence" it sought to obtain in this "sphere." Russia at once followed. Then came Italy, with France hard on her heels. England, it is interesting to note, started last; by way of economizing bought an old house, added, tinkered and finally at great expense rebuilt nearly the whole of it and got it quite done just before the outbreak of the Great War, when it was beginning to be doubtful if Montenegro would ever again require a British Legation....