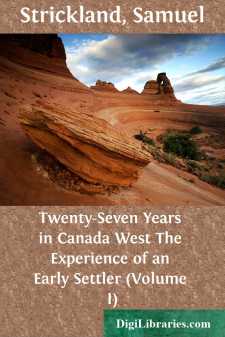 CHAPTER I. EMBARKATION FOR CANADA. — VOYAGE OUT. — SEA-LIFE. — ICEBERGS. — PASSAGE UP THE ST. LAWRENCE. — QUEBEC. — MEMORIALS OF GENERAL WOLFE. — CATHEDRAL. — HOSPITALITY. — EARTHQUAKES. — NUNS. — MONTREAL. — PROGRESS UP THE COUNTRY. — MY ROMAN CATHOLIC FELLOW-TRAVELLER. — ATTEMPT AT CONVERSION. — THE TOWNSHIP OF WHITBY.

A PREFERENCE for an active, rather than a professional life, induced me to accept the offer made by an old friend, of joining him at Darlington, in Upper Canada, in the year 1825. I therefore took leave of my family and pleasant home, in Suffolk, and engaged a passage in the brig "William M'Gilevray," commanded by William Stoddart, an experienced American seaman.

On the 28th of March we left the London Docks, and dropped down the river to Gravesend, and on the following day put our pilot ashore off Deal, and reached down as far as the coast of Sussex, where we were becalmed for two days. Here one of our cabin-boys, a German, met with a very serious accident by falling down the after hatchway, and fracturing several of his ribs. On this occasion I officiated as a surgeon, and bled him twice, with excellent effect, for he quickly recovered from the severe injury he had received. Before quitting Suffolk I had learned the art of blood-letting from our own medical attendant. Every person intending to settle in a distant colony ought to acquire this simple branch of surgery: I have often exercised it myself for the benefit of my fellow-creatures when no medical assistance could be procured.

It blew so fresh for two or three days, that we made up for our lost time, and were soon out of sight of Scilly: then I bade a long farewell to old England. I had often been on the sea before, but this was my first long voyage; every object, therefore, was new to me. I caught some birds in the rigging they were of a species unknown to me, but very beautiful. Being in want, too, of something to do, I amused myself with cleaning the captain's guns, which I hoped to use for our joint benefit before the end of the voyage.

The 18th and 19th of April were very stormy: the sea ran mountains high; we had a foot of water in the cabin, and all hands were at the pumps to lessen the growing evil. The gale lasted till the following morning. In the night the aurora borealis was particularly brilliant; but though the storm lulled, the wind was against us. On the 26th of April, I saw a whale, and, boy-like, fired at the huge creature: the shot must have hit him, for he made the water fly in all directions.

To vary the monotony of a sea-life, I sometimes played draughts with the mate, whom I always beat; but he took his defeats in good part, being a very easy-tempered fellow.

I awoke on the 21st of April literally wet to my skin by the deluge of water pouring down the cabin. I dressed myself in great haste and hurried upon deck to learn the cause of this disaster, which I found originated in the coming on of a terrible hurricane, which would not permit us to show a stitch of canvas, and found us continual employment at the pumps; my chest in the cabin shipped a sea which did not improve the appearance of my wardrobe....