Twenty-One Days in India; and, the Teapot Series 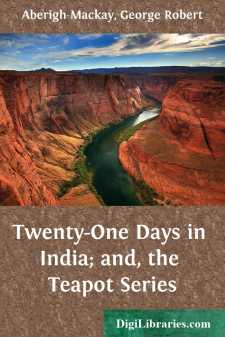 It is certainly a little intoxicating to spend a day with the Great Ornamental. You do not see much of him perhaps; but he is a Presence to be felt, something floating loosely about in wide epicene pantaloons and flying skirts, diffusing as he passes the fragrance of smile and pleasantry and cigarette. The air around him is laden with honeyed murmurs; gracious whispers play about the twitching bewitching corners of his delicious mouth. He calls everything by "soft names in many a mused rhyme." Deficits, Public Works, and Cotton Duties are transmuted by the alchemy of his gaiety into sunshine and songs. An office-box on his writing-table an office-box is to him, and it is something more: it holds cigarettes. No one knows what sweet thoughts are his as Chloe flutters through the room, blushful and startled, or as a fresh beaker full of the warm South glows between his amorous eye and the sun.

"I have never known      Praise of love or wine      That panted forth a flood of twaddle so divine."

I never tire of looking at a Viceroy. He is a being so heterogeneous from us! He is the centre of a world with which he has no affinity. He is a veiled prophet. [He wears many veils indeed.] He who is the axis of India, the centre round which the Empire rotates, is absolutely and necessarily withdrawn from all knowledge of India. He lisps no syllable of any Indian tongue; no race or caste, or mode of Indian life is known to him; all our delightful provinces of the sun that lie off the railway are to him an undiscovered country; Ghebers, Moslems, Hindoos blend together in one indistinguishable dark mass before his eye, [in which the cataract of English indifference has not been couched; most delightful of all—he knows not the traditions of Anglo-India, and he does not belong to the Bandicoot Club, St. James's Square!]

A Nawab, whom the Foreign Office once farmed out to me, often used to ask what the use of a Viceroy was. I do not believe that he meant to be profane. The question would again and again recur to his mind, and find itself on his lips. I always replied with the counter question, "What is the use of India?" He never would see—the Oriental mind does not see these things—that the chief end and object of India was the Viceroy; that, in fact, India was the plant and the Viceroy the flower.

I have often thought of writing a hymn on the Beauty of Viceroys; and have repeatedly attuned my mind to the subject; but my inability to express myself in figurative language, and my total ignorance of everything pertaining to metre, rhythm, and rhyme, make me rather hesitate to employ verse. Certainly, the subject is inviting, and I am surprised that no singer has arisen. How can any one view the Viceroyal halo of scarlet domestics, with all the bravery of coronets, supporters, and shields in golden embroidery and lace, without emotion! How can the tons of gold and silver plate that once belonged to John Company, Bahadur, and that now repose on the groaning board of the Great Ornamental, amid a glory of Himalayan flowers, or blossoms from Eden's fields of asphodel, be reflected upon the eye's retina without producing positive thrills and vibrations of joy (that cannot be measured in terms of ohm or farad) shooting up and down the spinal cord and into the most hidden seats of pleasure!...