Twentieth Century Negro Literature Or, A Cyclopedia of Thought on the Vital Topics Relating to the American Negro 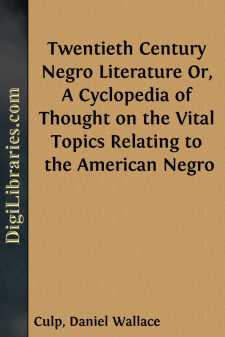 I am requested to write an introduction to this volume of essays, written by representative men and women of the Negro race and touching almost every phase of the Negro question. Certainly it is a hopeful sign that the Negro is beginning, with some degree of seriousness, to turn his eyes inward, to study himself, and try to discover what are his possibilities, and what the obstructions that lie in the way to his larger development. Undoubtedly this is a rational method of procedure, and the one most likely to reward his effort; for it is only in proportion as we become interested in ourselves that we enlist the interest of others, and only in proportion as we respect ourselves that we command the respect of others. The story is told of a Negro who, at some time during the War of the Rebellion, being asked why he did not enlist in the army, replied: "De Norf and de Souf am two dogs fightin' over a bone. De nigger am de bone and takes no part in de conflict." That this is not the language of an intelligent Negro is quite evident, if, indeed, it be the language of a Negro at all. So common has it been in this country to caricature the black man, to represent him as a driveler in speech and a buffoon in action, that I am always loath to accept as his those many would-be-witty sayings which, too often, originating with others, have been attributed to him. But be the author of that remark whosoever he may, one thing now is perfectly apparent—the Negro has reached beyond the "bone" stage. He is no longer content with being a passive observer, a quiet looker-on, while his character and interests are under discussion. He is now disposed to speak for himself, to "take part in the conflict." Any one desiring evidence of this will find it in the following pages of "Twentieth Century Negro Literature."

This book will do good. It will enlighten many of both races on topics respecting which they seem to be profoundly ignorant. Not very long ago a Negro delivered an address in one of the largest churches in Atlanta. It was an occasion in which a goodly number of white people was present. They expressed themselves as being delighted. One man said to a colored bishop that he didn't know there was a Negro in the state that could have delivered such an address. The fact is, both the good bishop and the writer of these lines might have found him twenty who could, at least, deliver an address as good, and ten, probably, who could deliver a better. Well, we don't know each other—we white and black folk. We are neighbors, yet strangers. Our thoughts, our motives, our desires are unknown to each other. Between the best white and black people, in whom alone vests the possibility of a rational and peaceful solution of the race question, there is absolutely no communication, no opportunity for exchange of views. Herein lies the danger; for both people, as a consequence, are suspicious, the one of the other. Not infrequently, with much uncharitableness, we attribute wrong motives to those who are truly our friends. Were we acquainted with one another, as we ought to be, we would doubtless be surprised to discover how little we differ in our thinking with reference to many of the vexed questions confronting us. Indeed, it has always been the belief of the writer, frequently expressed, that neither of the races is as bad as it appears to the other. May we not hope, then, that "Twentieth Century Negro Literature" may have the good fortune of falling into the hands of many white friends.

On the other hand, the book must be stimulating to the Negro people, especially to those of the younger generation, now blessed with large educational privilege. It must awaken in them self-respect, self-reliance, and the ambition to be and to do. By the perusal of its pages they will be led to see more clearly the path of duty, and to feel more sensibly the weight of responsibility resting upon them. The first generation of Negroes after emancipation exhibited to a painful degree the spirit of dependence, an inclination to lean on something and on somebody—now on the politician, now on the philanthropist. The reason for this, of course, is not far to fetch. The spirit of dependence is invariably a characteristic of weakness. It was not to be expected that the first generation emerging from slavery would possess all the heroic qualities. Gradually, however, the Negro is realizing the importance of self-help. Good books, among other agencies, will deepen this impression, and ultimately lead him to imbibe in all its fulness the sentiment of the poet,

"Destiny is not about thee, but within;Thyself must make thyself."

The contributors to this volume are worthy of notice. They are among the best we have. Some of them are personally known to the writer. They are men of experience, scholarly men, shunning rather than courting notoriety—just the class of men to guide a people, alas, too easily led astray by pretentious ignorance. From a number so large and so meritorious it would seem invidious to select any for special mention. It may not be out of place, however, to say a few words with reference to the editor and compiler, Dr. D. W. Culp. Born a slave in Union County, South Carolina, like many a black boy, he has had to forge his way to the front....