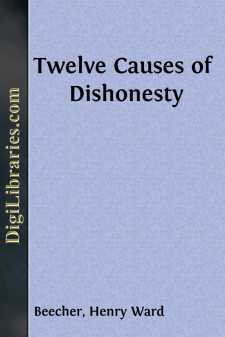 Only extraordinary circumstances can give the appearance of dishonesty to an honest man. Usually, not to seem honest, is not to be so. The quality must not be doubtful like twilight, lingering between night and day and taking hues from both; it must be day-light, clear, and effulgent. This is the doctrine of the Bible: Providing for honest things, not only in the sight of the Lord, but also in the sight of men. In general it may be said that no one has honesty without dross, until he has honesty without suspicion.

We are passing through times upon which the seeds of dishonesty have been sown broadcast, and they have brought forth a hundred-fold. These times will pass away; but like ones will come again. As physicians study the causes and record the phenomena of plagues and pestilences, to draw from them an antidote against their recurrence, so should we leave to another generation a history of moral plagues, as the best antidote to their recurring malignity.

Upon a land,—capacious beyond measure, whose prodigal soil rewards labor with an unharvestable abundance of exuberant fruits, occupied by a people signalized by enterprise and industry—there came a summer of prosperity which lingered so long and shone so brightly, that men forgot that winter could ever come. Each day grew brighter. No reins were put upon the imagination. Its dreams passed for realities. Even sober men, touched with wildness, seemed to expect a realization of oriental tales. Upon this bright day came sudden frosts, storms, and blight. Men awoke from gorgeous dreams in the midst of desolation. The harvests of years were swept away in a day. The strongest firms were rent as easily as the oak by lightning. Speculating companies were dispersed as seared leaves from a tree in autumn. Merchants were ruined by thousands; clerks turned adrift by ten thousands. Mechanics were left in idleness. Farmers sighed over flocks and wheat as useless as the stones and dirt. The wide sea of commerce was stagnant; upon the realm of Industry settled down a sullen lethargy.

Out of this reverse swarmed an unnumbered host of dishonest men, like vermin from a carcass. Banks were exploded,—or robbed,—or fleeced by astounding forgeries. Mighty companies, without cohesion, went to pieces, and hordes of wretches snatched up every bale that came ashore. Cities were ransacked by troops of villains. The unparalleled frauds, which sprung like mines on every hand, set every man to trembling lest the next explosion should be under his own feet. Fidelity seemed to have forsaken men. Many that had earned a reputation for sterling honesty were cast so suddenly headlong into wickedness, that man shrank from man. Suspicion overgrew confidence, and the heart bristled with the nettles and thorns of fear and jealousy. Then had almost come to pass the divine delineation of ancient wickedness: The good man is perished out of the earth: and there is none upright among men: they all lie in wait for blood; they hunt every man his brother with a net....