Twas the Night before Christmas A Visit from St. Nicholas 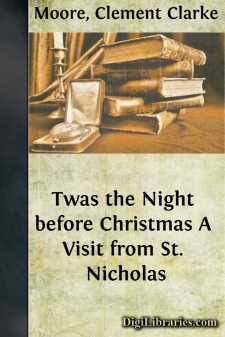 Add to My Favorites
Published: 8 years ago
Downloads: 52
Rating: (0 Votes)

A mid the many celebrations last Christmas Eve, in various places by different persons, there was one, in New York City, not like any other anywhere. A company of men, women, and children went together just after the evening service in their church, and, standing around the tomb of the author of "A Visit from St. Nicholas," recited together the words of the poem which we all know so well and love so dearly.

Dr. Clement C. Moore, who wrote the poem, never expected that he would be remembered by it. If he expected to be famous at all as a writer, he thought it would be because of the Hebrew Dictionary that he wrote.

He was born in a house near Chelsea Square, New York City, in 1781; and he lived there all his life. It was a great big house, with fireplaces in it;—just the house to be living in on Christmas Eve.

Dr. Moore had children. He liked writing poetry for them even more than he liked writing a Hebrew Dictionary. He wrote a whole book of poems for them.

One year he wrote this poem, which we usually call "'Twas the Night before Christmas," to give to his children for a Christmas present. They read it just after they had hung up their stockings before one of the big fireplaces in their house. Afterward, they learned it, and sometimes recited it, just as other children learn it and recite it now.

It was printed in a newspaper. Then a magazine printed it, and after a time it was printed in the school readers. Later it was printed by itself, with pictures. Then it was translated into German, French, and many other languages. It was even made into "Braille"; which is the raised printing that blind children read with their fingers. But never has it been given to us in so attractive a form as in this book. It has happened that almost all the children in the world know this poem. How few of them know any Hebrew!

Every Christmas Eve the young men studying to be ministers at the General Theological Seminary, New York City, put a holly wreath around Dr. Moore's picture, which is on the wall of their dining-room. Why? Because he gave the ground on which the General Theological Seminary stands? Because he wrote a Hebrew Dictionary? No. They do it because he was the author of "A Visit from St. Nicholas."

Most of the children probably know the words of the poem. They are old. But the pictures that Miss Jessie Willcox Smith has painted for this edition of it are new. All the children, probably, have seen other pictures painted by Miss Smith, showing children at other seasons of the year. How much they will enjoy looking at these pictures, showing children on that night that all children like best,—Christmas Eve!

T was the night before Christmas, when all through the houseNot a creature was stirring, not even a mouse;The stockings were hung by the chimney with careIn hopes that St. Nicholas soon would be there;

The children were nestled all snug in their beds,While visions of sugar-plums danced in their heads;And mamma in her kerchief, and I in my cap,Had just settled our brains for a long winter's nap,

When out on the lawn there arose such a clatter,I sprang from the bed to see what was the matter.Away to the window I flew like a flash,Tore open the shutters and threw up the sash.

The moon on the breast of the new-fallen snowGave the lustre of mid-day to objects below,When, what to my wondering eyes should appear,But a miniature sleigh, and eight tiny reindeer,

With a little old driver, so lively and quick,I knew in a moment it must be St. Nick.More rapid than eagles his coursers they came,And he whistled, and shouted, and called them by name:

As dry leaves that before the wild hurricane fly,When they meet with an obstacle, mount to the sky;So up to the house-top the coursers they flew,With the sleigh full of Toys, and St. Nicholas too.

And then, in a twinkling, I heard on the roofThe prancing and pawing of each little hoof....