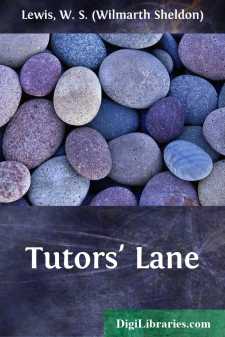 Having once, for a few months, had a literary column in a newspaper, I have come to admire those authors who place at the beginning of their books a "word" in which the whole thing is given away. The time that those words saved me in writing my reviews—time which otherwise would have been lost in reading the books—enabled me to write this book; a consummation which may have, in its heart, a significant kernel, and which certainly shows how funny the world is, after all.

Now, as to this book and what it is all about, I frankly am at a loss. That's the difficulty of being too near it. Whether it is realism, naturalism, or merely restrained romanticism, I simply do not know. It is awkward not knowing, for in the battle of the schools now raging I should like to take sides. I should like either to charge with the romantics, or defend with the realists. It must be good fun being pushed and shoved around, with someone's elbow in your eye and someone else's hatpin in your ear, and everyone crying, in the words of a recent heroine, "I want to be outraged." But, for the present at least, I must be content, like little Oliver Twist, to look hungrily on.

The story which trickles through the book starts out bravely enough. Of this much, at least, I can be moderately sure. For a short time it looks as though something might come of it; but nothing really does. It is all so terribly obvious. There are no obstacles such as one finds in real fiction; there is no love spasm in Chapter XXV. There is no Chapter XXV at all! And so it must be perfectly clear that those who insist upon having their love spasms will be bored to death by Tutors' Lane and should on no account be allowed to look at it. There is love, of course, in an academic community; one frequently sees evidences of it; but it is love under control, properly subordinated to the all important business of uniting youth and learning—and to snatching time for an occasional rejuvenating flutter in the sacred fount itself.

So the syllabus is little more than a nervous shake of the hand and a timid statement of a few negative "points"—a disheartening, if not positively dangerous, affair. That there are lurking beauties, however, peeping shyly out like johnny-jump-ups and wild raspberry blossoms, there appears to be some evidence on the jacket. Meanwhile, the course is open, the bell is ringing to class, and the instructor, turning over the text to Chapter I, is prepared to meet whatever scholars God, in his greater wisdom, has been pleased to set before him.

TOM REYNOLDS, Instructor in English in Woodbridge College, walked along Tutors' Lane in the gathering dusk of a March afternoon. Persons whose knowledge of collegiate dons is limited to the poverty-stricken, butterfly-chasing genus created by humorous scenario writers would be surprised to learn that our hero—for such he is to be—was young, sound of wind and limb, and at the present moment comfortably clothed in a coon-skin coat. The latter touch might be accounted for by such persons on the basis of an eccentric city cousin generously disposed to casting off his garments when only half worn, but the other two points must convince them of the faithlessness of the whole account, and their acquaintance with the young man will accordingly end with the first paragraph....