Turns of Fortune And Other Tales 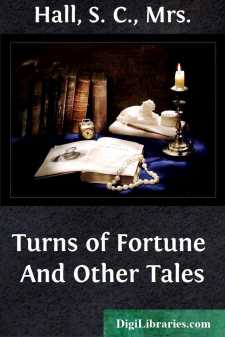 "Hush, Sarah!" exclaimed old Jacob Bond, as he sat up in his bed, while the wind clattered and whistled through the shivering window frames. "Hush! Is that Brindle's bark?"

"I don't know why I should feel cold, Sarah," he replied, pointing his shadowy fingers towards the grate, where an abundant fire blazed; "I am sure you have put down as much wood as would roast an ox."

"Still, we must not be wasteful, Sarah," he answered; "wilful waste makes woful want." Sarah Bond covered the old man carefully over, while he laid himself stiffly down upon his pallet, re-muttering his favourite proverb over and over again.

She then drew the curtains more closely, and seated herself in an old-fashioned chair beside a little table in front of the fire.

The room had been the drawing-room of the old house in which Mr. Bond and his daughter resided, but for the sake of saving both labour and expense, he had had his bed removed into it; and though anything but comfortable, a solitary, impoverished, and yet gorgeous appearance pervaded the whole, such as those who delineate interiors, loving small lights and deep shadows, would covet to convey to their canvass. The bed upon which the old man lay was canopied, and of heavy crimson damask. In the dim light of that spacious room, it looked to the worn-out eyes of Sarah Bond more like a hearse than a bed. Near it was an old spinnet, upon which stood a labelled vial, a tea-cup, and a spoon. When Sarah seated herself at the table, she placed her elbows upon it, and pressed her folded hands across her eyes; no sigh or moan escaped her, but her chest heaved convulsively; and when she removed her hands, she drew a Bible toward her, trimmed the lamp, and began to read.

The voice of an old French clock echoed painfully through the chamber. Sarah longed to stop it, and yet it was a companion in her watchings. Once, a shy, suspicious, bright-eyed mouse rattled among the cinders, and ran into the wainscot, and then came out again, and stared at Sarah Bond, who, accustomed to such visits, did not raise her eyes to inquire into the cause of the rustling which in a few more moments took place upon a tray containing the remnants of some bread and cheese, her frugal supper.

"Only the mice, father, as usual; do, father, try to sleep. I watch carefully; there is nothing to fear."

"Ay, ay, men and mice all the same; nothing but waste. When I am gone, Sarah, keep what you will have; it won't be much, Sarah, my poor girl, it won't be much; just enough to need care; but KEEP IT; don't lend it, or give it, or spend it; you are fond of spending, my poor girl; see that huge fire, enough for three nights; early bad habits. When we lived in a small house and were poor, it was then you learned to be extravagant; I had no money then, so did not know its value."

"But we were happier then, father," said Sarah Bond; "we were so cheerful and happy then, and so many poor people blessed my dear mother, and Mary"—

"Hiss—ss," uttered the dying miser; "don't dare mention your sister, who disgraced me by marrying a pauper; a pauper who threatened my life, because I would not give him my money to save him from starving; but he did not get the old father-in-law's gold; no; he starved, and"—

The words thus uttered by her father, who she knew had not many hours to live—uttered, too, with such demoniac bitterness—forced the gentle, patient woman to start from her seal, and pass rapidly across the room to the side of his bed, where she sank upon her knees, and seized his shrunken hands in hers....