True to his Colours The Life that Wears Best 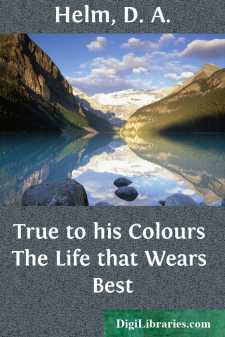 Look back some forty years—there was not a quieter place then than the little village of Crossbourne. It was a snug spot, situated among hills, and looked as though it were hiding away out of the sight and notice of the bustling, roaring traffic that was going ceaselessly on all around it.

A little fussy stream or brook flowed on restlessly day and night through the centre of the village, and seemed to be the only thing there that was ever in a hurry. Carts and carriages, but seldom many of the latter, had to drive through the stream when they wished to cross it; for there was no bridge except a very rude one for foot-passengers just before you came to the old mill, where the villagers had had their corn ground for generations.

Then to the north of the stream the houses straggled up on either side of a long winding street, sometimes two or three together under one long thatched roof, and in other places singly, with a small bit of meagre garden round them; a wooden latch lifted by a string which dangled outside being the prevailing fastening to the outer doors.

Right up at the top of the street, and a little to the left, was the old Saxon church, which had retained a considerable share of its original massive beauty, spite of the combined attacks of plaster, mildew, and a succession of destructive restorations which had lowered the roof, bricked up more than one fine old window, and thrust out a great iron chimney, which looked not unlike the mailed hand of some giant shaking its clenched fist at the solid tower which it was unable to destroy.

Just under the shadow of the old church, and separated from it by the low wall of the churchyard, was the vicarage, a grey-looking structure in the midst of a small but well-stocked garden; while beyond it were fields in long succession, with a ponderous-looking farm-house crouching down here and there amongst them.

Of course there was an inn in the village. It was marked out to travellers by a sign-board dependent from a beam projecting over the footpath. Something had once been painted on the board, but it had become so blurred and indistinct under the corroding action of sun and rain, that it would be quite impossible now to decide whether the features delineated on it were those of a landscape, a lion, or a human countenance.

Such was Crossbourne some forty years back. But now, what a marvellous change! Coal has been found close by, and the little village has leapt, as if by magic, into a thriving town. Huge factories and foundries rise from the banks of the stream; the ford is spanned by a substantial bridge; the corn-mill has disappeared, and so have the rheumatic-looking old mossy cottages. A street of prim, substantial houses, uniform, and duly numbered, with brass handles, latches, and knockers to the doors, now leads up to the church. And that venerable building has certainly gained by the change; for the plaster and the iron chimney have vanished, full daylight pours in through all the windows, while two new aisles have been added in harmony with the original design of the unknown architect....