True Stories about Dogs and Cats 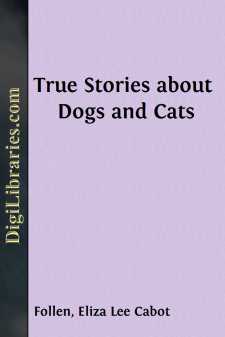 TRUE STORIES ABOUT DOGS AND CATS.

In a pretty, quiet village in New England lived Mary Chilton. She was a widow. She had two sons; and it was the occupation and the happiness of her life to do all she could to make her boys good and happy. I should say to help and teach them to be good and happy; for boys and girls must make themselves good; and then, of course, they will be happy; and no one can be made good or happy against his will.

I hear some boy or girl who reads this say, "How old were they, and what were their names?" No boy can get along with another boy till he knows his name and age, and so, that you may be sure that they were real, live boys, I will tell you these important facts. The eldest was called Frank, and was nine years old. His brother was called Harry, and was seven. They were very much like other boys, somewhat disposed to have their own way in every thing, and a little vexed when they could not do as they pleased; sometimes really wishing to do right, and be obedient, and make their mother happy.

The little fellows were fond of saying to their mother that when they grew bigger they should take care of her; and the idea that she depended upon them for her happiness often made them stop and think when they were disposed to do a wrong thing.

When Harry said to Frank, "Mother will be so sorry if we do it," Frank would stop and think, and that was enough.

Stop and think. Grand words, and worth attending to. I believe that, if boys and girls would only keep these words well in mind, there would be only a small number of really naughty children.

It was a custom with this good and faithful mother to have a little talk with her boys, every night before their bed time, of what had passed during the day. Sometimes she told them stories, sometimes they repeated poetry.

The hours they passed in this way were the happiest in the whole day. Some of their twilight talks and stories Mrs. Chilton wrote down, thinking they might amuse some little cousins, who lived at a distance. Perhaps some other little boys and girls may like to hear them too.

One evening, early in November, when tea was over, and the tea things were removed; when the nice hearth was swept clean, and the great wood fire was blazing brightly, and sending forth its cheering light and heat through the whole room, Frank and Harry had taken their accustomed places, one on each side of their mother who was sitting on the old-fashioned sofa. Each one appropriated a hand to himself, when they both, almost in the same breath, said to her, "You promised us, Mother, if we were good boys, to tell us a story this evening. Now, have we not been good boys all day?"

"Yes, you have," she replied; "you have not quarrelled, and you have got your lessons well; and I will gladly perform my promise. But I hardly know whether I can remember or make up any story to tell you. However, I will do my best. What sort of a story will you have?"

"I," said Frank, "should like a real good true story about a dog, or any other animal."