True Riches Or, Wealth Without Wings 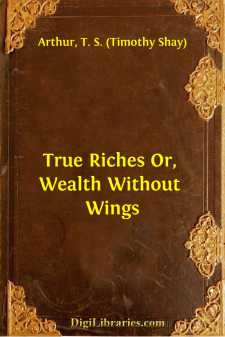 "To what do the sales amount?" asked a young man, clerk to the dealer, approaching his principal as he spoke.

"To just two hundred dollars, Edward. It's the best day we've had for a month."

"The best, in more than one sense," remarked the young man, with a meaning expression.

"You're right there, too," said Jasper, with animation, rubbing his hands together as he spoke, in the manner of one who is particularly well pleased with himself. "I made two or three trades that told largely on the sunny side of profit and loss account."

"True enough. Though I've been afraid, ever since you sold that piece of velvet to Harland's wife, that you cut rather deeper than was prudent."

"Not a bit of it—not a bit of it! Had I asked her three dollars a yard, she would have wanted it for two. So I said six, to begin with, expecting to fall extensively; and, to put a good face on the matter, told her that it cost within a fraction of what I asked to make the importation—remarking, at the same time, that the goods were too rich in quality to bear a profit, and were only kept as a matter of accommodation to certain customers."

"And she bought at five?"

"Yes; thinking she had obtained the velvet at seventy-five cents a yard less than its cost. Generous customer, truly!"

"While you, in reality, made two dollars and a half on every yard she bought."

"She had six yards."

"Yes; out of which we made a clear profit of fifteen dollars. That will do, I'm thinking. Operations like this count up fast."

"Is it altogether prudent to multiply operations of this character? Won't it make for you a bad reputation, and thus diminish, instead of increasing, your custom?"

"I fear nothing of the kind. One-half the people are not satisfied unless you cheat them. I've handled the yardstick, off and on, for the last fifteen or twenty years, and I think my observation during that time is worth something. It tells me this—that a bold face, a smooth tongue, and an easy conscience are worth more in our business than any other qualities. With these you may do as you list. They tell far better than all the 'one-price' and fair-dealing professions, in which people have little faith. In fact, the mass will overreach if they can, and therefore regard these 'honest' assumptions with suspicion."

The young man, Edward Claire, did not make a reply for nearly a minute. Something in the words of Mr. Jasper had fixed his thought, and left him, for a brief space of time, absorbed in his own reflections.

Lifting, at length, his eyes, which had been resting on the floor, he said—

"Just that sum, if I have made a right estimate," replied Jasper; "and that is what I call a fair day's business."

While he was yet speaking, a lad entered the store, and laid upon the counter a small sealed package, bearing the superscription, "Leonard Jasper, Esq." The merchant cut the red tape with which it was tied, broke the seal, and opening the package, took therefrom several papers, over which he ran his eyes hurriedly; his clerk, as he did so, turning away....