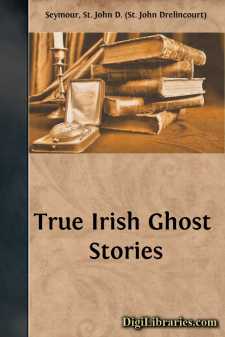 CHAPTER I HAUNTED HOUSES IN OR NEAR DUBLIN

Of all species of ghostly phenomena, that commonly known as "haunted houses" appeals most to the ordinary person. There is something very eerie in being shut up within the four walls of a house with a ghost. The poor human being is placed at such a disadvantage. If we know that a gateway, or road, or field has the reputation of being haunted, we can in nearly every case make a detour, and so avoid the unpleasant locality. But the presence of a ghost in a house creates a very different state of affairs. It appears and disappears at its own sweet will, with a total disregard for our feelings: it seems to be as much part and parcel of the domicile as the staircase or the hall door, and, consequently, nothing short of leaving the house or of pulling it down (both of these solutions are not always practicable) will free us absolutely from the unwelcome presence.

There is also something so natural, and at the same time so unnatural, in seeing a door open when we know that no human hand rests on the knob, or in hearing the sound of footsteps, light or heavy, and feeling that it cannot be attributed to the feet of mortal man or woman. Or perhaps a form appears in a room, standing, sitting, or walking—in fact, situated in its three dimensions apparently as an ordinary being of flesh and blood, until it proves its unearthly nature by vanishing before our astonished eyes. Or perhaps we are asleep in bed. The room is shrouded in darkness, and our recumbent attitude, together with the weight of bed-clothes, hampers our movements and probably makes us more cowardly. A man will meet pain or danger boldly if he be standing upright—occupying that erect position which is his as Lord of Creation; but his courage does not well so high if he be supine. We are awakened suddenly by the feel that some superhuman Presence is in the room. We are transfixed with terror, we cannot find either the bell-rope or the matches, while we dare not leap out of bed and make a rush for the door lest we should encounter we know not what. In an agony of fear, we feel it moving towards us; it approaches closer, and yet closer, to the bed, and—for what may or may not then happen we must refer our readers to the pages of this book.

But the sceptical reader will say: "This is all very well, but—there are no haunted houses. All these alleged strange happenings are due to a vivid imagination, or else to rats and mice." (The question of deliberate and conscious fraud may be rejected in almost every instance.) This simple solution has been put forward so often that it should infallibly have solved the problem long ago. But will such a reader explain how it is that the noise made by rats and mice can resemble slow, heavy footsteps, or else take the form of a human being seen by several persons; or how our imagination can cause doors to open and shut, or else create a conglomeration of noises which, physically, would be beyond the power of ordinary individuals to reproduce?...