by John A. (John Alexander) MacDonald 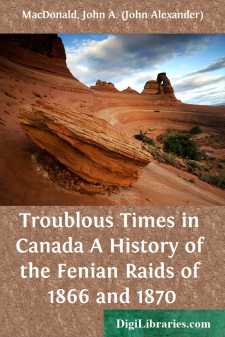 One of the most dangerous and critical periods in the history of Canada was that which closely followed the termination of the Civil War between the Northern and Southern States of America in the year 1865. It is a strange fact that Canadian authors and historians do not seem to have fully realized the gravity of the situation that then existed, as the event has been passed over by them with the barest possible mention. Thus the people of the present generation know very little of the Fenian troubles of 1866 and 1870, and the great mass of the young Canadian boys and girls who are being educated in our Public Schools and Colleges are in total ignorance of the grave danger which cast dark shadows over this fair and prosperous Dominion in those stormy days. It was a period of great peril to this rising young Nation of the North, which might possibly have ended in the severance of Canada from British dominion. But happily this was prevented by the prompt measures that were taken to defend our soil, and the quick response that was made by the resolute Canadian Volunteers when the bugles sounded the call to assemble for active service on our frontiers.

The fierce conflict which had been waged in the United States of America for four long years between the North and the South was terminated by the subjugation of the latter in the spring of 1865, and the tattered battle flags of the Confederate forces were furled forever. Over a million of men, veteran soldiers of both armies, were still in the field when the Civil War ended, and when these mighty forces were disbanded, hundreds of thousands of trained warriors were thrown upon their own resources, without occupation or employment. While the majority of these soldiers quickly resumed their old business or farming pursuits, yet there remained idle a vast number of turbulent and restless spirits who were ready and willing to embark in any fillibustering expedition that might present itself. These men were all trained and seasoned veterans of both the Union and Confederate armies—soldiers who were inured to the hardships and rigors of many campaigns and fierce battles, and thousands of them readily enrolled themselves under the Fenian banners in anticipation of a war being inaugurated against the British nation, with the invasion of Canada as the first step.

The defence of our extensive Canadian frontier depended mainly upon the volunteer militia force of the scattered Provinces, and to their patriotism and gallantry in springing to arms when their services were needed to defend their native land, may be ascribed the glory of frustrating the attempts of the Fenian invaders to establish themselves on Canadian soil. True, there were some British regular troops on duty in Canada in 1866 around which to rally, and they did their duty nobly, but in the operations on the Niagara frontier especially, it was the Canadian volunteers who bore the brunt of battle, and by their devotion to duty, courage and bravery under hostile fire, succeeded in causing the hasty retirement of the Fenian invaders from our shores, and again, as in days of yore, preserved Canada to the Empire, as one of the brightest jewels in the British Crown....