Troublesome Comforts A Story for Children 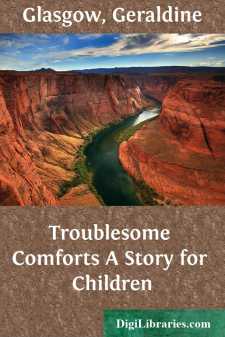 Mrs. Beauchamp sat in a stuffy third-class carriage at Liverpool Street Station, and looked wistfully out of the window at her husband. Behind her the carriage seemed full to overflowing with children and paper parcels, and miscellaneous packages held together by straps. Even the ticket collector failed in his mental arithmetic when nurse confronted him with the tickets.

"There's five halfs and two wholes," she said, "and a dog and a bicycle."

Tom crawled out, a mass of dust and grime, not in the least disconcerted.

"I thought I could travel under the seat if I liked," he said.

"Oh, if you like!" said his father; but nurse, with a look of despair, caught at his knickerbockers just as he was plunging into the dust again. "Not whilst I have power to hold you back, Master Dick," she said.—"No, sir, you haven't got the washing of him, and wild horses won't be equal to it if he gets his way."

Tommy squirmed and wriggled, but nurse's hand was muscular, and the strength of despair was in her grip. Mrs. Beauchamp realized that in a few minutes the keeping in order of the turbulent crew would fall to her, but for the present she tried to shut her ears to Susie's domineering tones and Tommy's scornful answers. Susie always chose the most unsuitable moments for displays of temper, and Mrs. Beauchamp sighed as she looked at the firm little mouth and eager blue eyes. She felt so very, very sorry to be leaving Dick the elder in London—so intolerably selfish. Her voice was full of tender regret.

"It seems so horrid of me, Dick. It is you who ought to be having the holiday, not me."

"Oh, I shall manage quite well," said Mr. Beauchamp cheerfully. "It is rather a bore being kept in London, of course, away from you and the chicks"—this came as an afterthought—"but I hope you will find it plane sailing. I want it to be a real rest to you, old woman."

His eyes wandered past her sweet, tired face to the fair and dark heads beyond, of which she was the proud possessor, and his sigh was not altogether a sigh of disappointment. Mrs. Beauchamp glanced at them too, and the anxious line deepened between her eyes. She pushed back with a cool hand the loose hair on her forehead. "It is an ideal place for children," she said—"sand and shells; and they can bathe from the lodgings."

"You will be good to your mother, boys," said Mr. Beauchamp. He was directly appealing to Tommy, but he included the whole family in his sweeping glance. "Don't overpower her.—And, Susie, you are the eldest; you must be an example."

Susie flounced out her ridiculously short skirts with a triumphant look round. "I am a help, aren't I, mother?" she said.

"Sometimes, dear," said her mother, with rather a tired smile.

"And you won't bother about me, Christina?" he said.

She leant farther out of the window, but one hand held firmly to Amy's slim black legs—Amy had scrambled up on to the seat, and was pushing the packages in the rack here and there, searching for something....