Trial of the Witnesses of the Resurrection of Jesus 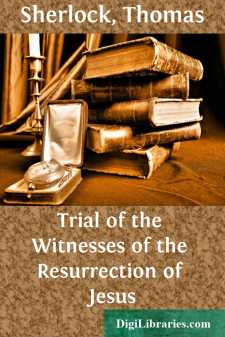 We were, not long since, some Gentlemen of the inns of court together, each to other so well known, that no man's presence was a confinement to any other, from speaking his mind on any subject that happened to arise in conversation. The meeting was without design, and the discourse, as in like cases, various. Among other things we fell upon the subject of Woolston's trial and conviction, which had happened some few days before. That led to a debate, How the law finds in such cases? what punishment it inflicts? and, in general, whether the law ought at all to interpose in controversies of this kind? We were not agreed in these points. One, who maintained the favorable side to Woolston, discovered a great liking and approbation of his discourses against the miracles of Christ, and seemed to think his arguments unanswerable. To which another replied, I wonder that one of your abilities, and bred to the profession of the law, which teaches us to consider the nature of evidence, and its proper weight, can be of that opinion: I am sure you would be unwilling to determine a property of five shillings upon such evidence, as you now think material enough to overthrow the miracles of Christ.

It may easily be imagined, that this opened a door to much dispute, and determined the conversation for the remainder of the evening to this subject. The dispute ran thro' almost all the particulars mentioned in Woolston's pieces; but the thread of it was broken by several digressions, and the pursuit of things which were brought accidentally into the discourse. At length one of the company said pleasantly; Gentlemen, you don't argue like lawyers; if I were judge in this cause, I would hold you better to the point. The company took the hint, and cried, they should be glad to have the cause reheard, and him to be the judge. The Gentlemen who had engaged with mettle and spirit in a dispute which arose accidentally, seemed very unwilling to be drawn into a formal controversy; and especially the Gentleman who argued against Woolston, thought the matter grew too serious for him, and excused himself from undertaking a controversy in religion, of all others the most momentous. But he was told, that the argument should be confined merely to the nature of the evidence; and that might be considered, without entering into any such controversy as he would avoid; and, to bring the matter within bounds, and under one view, the evidence of Christ's resurrection, and the exceptions taken to it, should be the only subject of the conference. With such persuasion he suffered himself to be persuaded, and promised to give the company, and their new-made judge, a meeting that day fortnight. The judge and the rest of the company were for bringing on the cause a week sooner; but the council for Woolston took the matter up, and said, Consider, Sir, the Gentleman is not to argue out of Littleton, Plowden, or Coke, authors to him well known; but he must have his authorities from Matthew, Mark, Luke, and John; and a fortnight is time little enough of all conscience to gain a familiarity with a new acquaintance: and, turning to the Gentleman, he said, I'll call upon you before the fortnight is out, to see how reverend an appearance you make behind Hammond on the New Testament, a concordance on one hand, and a folio Bible with references on the other....