Trial of Duncan Terig, alias Clerk, and Alexander Bane Macdonald for the Murder of Arthur Davis, Sergeant in General Guise's Regiment of Foot 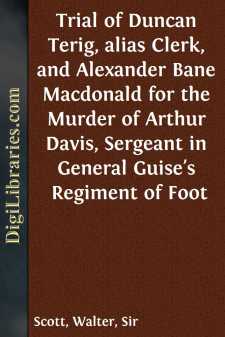 Although the giving information concerning the unfair manner in which they were dismissed from life, is popularly alleged to have been a frequent reason why departed spirits revisit the nether world, it is yet only in a play of the witty comedian, Foote, that the reader will find their appearance become the subject of formal and very ingenious pleadings. In his farce called the Orators, the celebrated Cocklane Ghost is indicted by the name of Fanny the Phantom, for that, contrary to the King's peace, it did annoy, assault, and terrify divers persons residing in Cocklane and elsewhere, in the county of Middlesex. The senior counsel objects to his client pleading to the indictment, unless she is tried by her equals in rank, and therefore he moves the indictment be quashed, unless a jury of ghosts be first had and obtained. To this it is replied, that although Fanny the Phantom had originally a right to a jury of ghosts, yet in taking upon her to knock, to flutter, and to scratch, she did, by condescending to operations proper to humanity, wave her privileges as a ghost, and must consent to be tried in the ordinary manner. It occurs to the Justice who tries the case, that there will be difficulty in impanelling a jury of ghosts, and he doubts how twelve spirits who have no body at all, can be said to take a corporal oath, as required by law, unless, indeed, as in the case of the Peerage, the prisoner may be tried upon her honour. At length the counsel for the prosecution furnishes the list of ghosts for the selection of the jury, being the most celebrated apparitions of modern times, namely, Sir George Villiers, the evil genius of Brutus, the Ghost of Banquo, and the phantom of Mrs Veal. The counsel for the prosecution objects to a woman, and the court dissolves, under the facetious order, that if the Phantom should plead pregnancy, Mrs Veal will be admitted upon the jury of matrons.

This admirable foolery is carried by the English Aristophanes nearly as far as it will go; yet it is very contrary to the belief of those, who conceive that injured spirits are often the means of procuring redress for wrongs committed upon their mortal frames, to find how seldom in any country an allusion hath been made to such evidence in a court of justice, although, according to their belief, such instances must have frequently occurred. One or two cases of such apparition-evidence our researches have detected.

It is a popular story, that an evidence for the Crown began to tell the substance of an alleged conversation with the ghost of a murdered man, in which he laid his death to the accused person at the bar. "Stop," said the judge, with becoming gravity, "this will not do; the evidence of the ghost is excellent, none can speak with a clearer cause of knowledge to any thing which befell him during life. But he must be sworn in usual form. Call the ghost in open court, and if he appears, the jury and I will give all weight to his evidence; but in case he does not come forward, he cannot be heard, as now proposed, through the medium of a third party." It will readily be conceived that the ghost failed to appear, and the accusation was dismissed....