Trent's Trust, and Other Stories 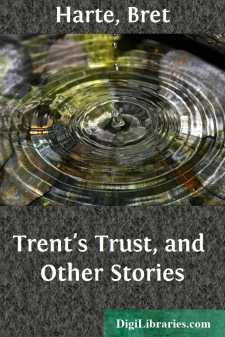 Randolph Trent stepped from the Stockton boat on the San Francisco wharf, penniless, friendless, and unknown. Hunger might have been added to his trials, for, having paid his last coin in passage money, he had been a day and a half without food. Yet he knew it only by an occasional lapse into weakness as much mental as physical. Nevertheless, he was first on the gangplank to land, and hurried feverishly ashore, in that vague desire for action and change of scene common to such irritation; yet after mixing for a few moments with the departing passengers, each selfishly hurrying to some rendezvous of rest or business, he insensibly drew apart from them, with the instinct of a vagabond and outcast. Although he was conscious that he was neither, but merely an unsuccessful miner suddenly reduced to the point of soliciting work or alms of any kind, he took advantage of the first crossing to plunge into a side street, with a vague sense of hiding his shame.

A rising wind, which had rocked the boat for the last few hours, had now developed into a strong sou'wester, with torrents of rain which swept the roadway. His well-worn working clothes, fitted to the warmer Southern mines, gave him more concern from their visible, absurd contrast to the climate than from any actual sense of discomfort, and his feverishness defied the chill of his soaking garments, as he hurriedly faced the blast through the dimly lighted street. At the next corner he paused; he had reached another, and, from its dilapidated appearance, apparently an older wharf than that where he had landed, but, like the first, it was still a straggling avenue leading toward the higher and more animated part of the city. He again mechanically—for a part of his trouble was a vague, undefined purpose—turned toward it.

In his feverish exaltation his powers of perception seemed to be quickened: he was vividly alive to the incongruous, half-marine, half-backwoods character of the warehouses and commercial buildings; to the hull of a stranded ship already built into a block of rude tenements; to the dark stockaded wall of a house framed of corrugated iron, and its weird contiguity to a Swiss chalet, whose galleries were used only to bear the signs of the shops, and whose frame had been carried across seas in sections to be set up at random here.

Moving past these, as in a nightmare dream, of which even the turbulency of the weather seemed to be a part, he stumbled, blinded, panting, and unexpectedly, with no consciousness of his rapid pace beyond his breathlessness, upon the dazzling main thoroughfare of the city. In spite of the weather, the slippery pavements were thronged by hurrying crowds of well-dressed people, again all intent on their own purposes,—purposes that seemed so trifling and unimportant beside his own. The shops were brilliantly lighted, exposing their brightest wares through plate-glass windows; a jeweler's glittered with precious stones; a fashionable apothecary's next to it almost outrivaled it with its gorgeous globes, the gold and green precision of its shelves, and the marble and silver soda fountain like a shrine before it....