Trees of the Northern United States Their Study, Description and Determination 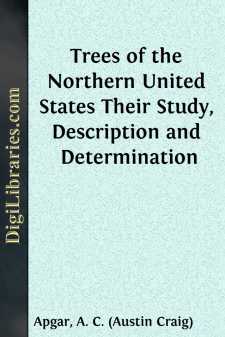 This book has been prepared with the idea that teachers generally would be glad to introduce into their classes work dealing with the real objects of nature, provided the work chosen were of a character that would admit of its being studied at all seasons and in all localities, and that the subject were one of general interest, and one that could be taught successfully by those who have had no regular scientific instruction.

The trees of our forests, lawns, yards, orchards, streets, borders, and parks give us just such a department. Though many consider a large part of the vegetable kingdom of little importance, and unworthy of any serious study, there are few who do not admire, and fewer still who do not desire to know, our trees, the monarchs of all living things.

The difficulty in tree study by the aid of the usual botanies lies mainly in the fact that in using them the first essential parts to be examined are the blossoms and their organs. These remain on the trees a very short time, are often entirely unnoticed on account of their small size or obscure color, and are usually inaccessible even if seen. In this book the leaves, the wood, the bark, and, in an elementary way, the fruit are the parts to which the attention is directed; these all can be found and studied throughout the greater part of the year, and are just the parts that must be thoroughly known by all who wish to learn to recognize trees.

Though every teacher is at liberty to use the book as he thinks best, the author, who has been a class teacher for over twenty years, is of the opinion that but little of Part I. need be thoroughly studied and recited, with the exception of Chapter III. on leaves. The object of this chapter is not to have the definitions recited (the recitation of definitions in school work is often useless or worse than useless), but to teach the pupil to use the terms properly and to make them a portion of his vocabulary. The figures on -43 are designed for class description, and for the application of botanical words. The first time the chapter is studied the figure illustrating the term should be pointed out by the pupil; then, as a review of the whole chapter, the student should be required to give a full description of each leaf.

After this work with Chapter III., and the careful reading of the whole of Part I., the pupils can begin the description of trees, and, as the botanical words are needed, search can be made for them under the proper heads or in the Glossary.

The Keys are for the use of those who know nothing of scientific botany. The advanced botanist may think them too artificial and easy; but let him remember that this work was written for the average teacher who has had no strictly scientific training. We can hardly expect that the great majority of people will ever become scientific in any line, but it is possible for nearly every one to become interested in and fully acquainted with the trees of his neighborhood.

The attainment of such botanical knowledge by the plan given in this volume will not only accomplish this useful purpose, but will do what is worth far more to the student, i.e., teach him to employ his own senses in the investigation of natural objects, and to use his own powers of language in their description....