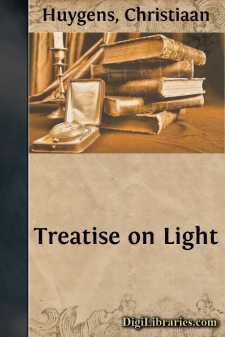 CHAPTER I ON RAYS PROPAGATED IN STRAIGHT LINES

s happens in all the sciences in which Geometry is applied to matter, the demonstrations concerning Optics are founded on truths drawn from experience. Such are that the rays of light are propagated in straight lines; that the angles of reflexion and of incidence are equal; and that in refraction the ray is bent according to the law of sines, now so well known, and which is no less certain than the preceding laws.

The majority of those who have written touching the various parts of Optics have contented themselves with presuming these truths. But some, more inquiring, have desired to investigate the origin and the causes, considering these to be in themselves wonderful effects of Nature. In which they advanced some ingenious things, but not however such that the most intelligent folk do not wish for better and more satisfactory explanations. Wherefore I here desire to propound what I have meditated on the subject, so as to contribute as much as I can to the explanation of this department of Natural Science, which, not without reason, is reputed to be one of its most difficult parts. I recognize myself to be much indebted to those who were the first to begin to dissipate the strange obscurity in which these things were enveloped, and to give us hope that they might be explained by intelligible reasoning. But, on the other hand I am astonished also that even here these have often been willing to offer, as assured and demonstrative, reasonings which were far from conclusive. For I do not find that any one has yet given a probable explanation of the first and most notable phenomena of light, namely why it is not propagated except in straight lines, and how visible rays, coming from an infinitude of diverse places, cross one another without hindering one another in any way.

I shall therefore essay in this book, to give, in accordance with the principles accepted in the Philosophy of the present day, some clearer and more probable reasons, firstly of these properties of light propagated rectilinearly; secondly of light which is reflected on meeting other bodies. Then I shall explain the phenomena of those rays which are said to suffer refraction on passing through transparent bodies of different sorts; and in this part I shall also explain the effects of the refraction of the air by the different densities of the Atmosphere.

Thereafter I shall examine the causes of the strange refraction of a certain kind of Crystal which is brought from Iceland. And finally I shall treat of the various shapes of transparent and reflecting bodies by which rays are collected at a point or are turned aside in various ways. From this it will be seen with what facility, following our new Theory, we find not only the Ellipses, Hyperbolas, and other curves which Mr. Des Cartes has ingeniously invented for this purpose; but also those which the surface of a glass lens ought to possess when its other surface is given as spherical or plane, or of any other figure that may be.

It is inconceivable to doubt that light consists in the motion of some sort of matter. For whether one considers its production, one sees that here upon the Earth it is chiefly engendered by fire and flame which contain without doubt bodies that are in rapid motion, since they dissolve and melt many other bodies, even the most solid; or whether one considers its effects, one sees that when light is collected, as by concave mirrors, it has the property of burning as a fire does, that is to say it disunites the particles of bodies. This is assuredly the mark of motion, at least in the true Philosophy, in which one conceives the causes of all natural effects in terms of mechanical motions. This, in my opinion, we must necessarily do, or else renounce all hopes of ever comprehending anything in Physics.

And as, according to this Philosophy, one holds as certain that the sensation of sight is excited only by the impression of some movement of a kind of matter which acts on the nerves at the back of our eyes, there is here yet one reason more for believing that light consists in a movement of the matter which exists between us and the luminous body....