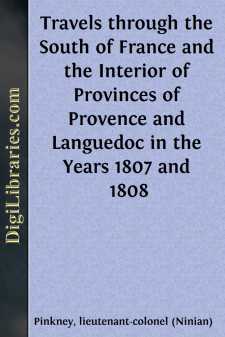 From my earliest life I had most anxiously wished to visit France—a country which, in arts and science, and in eminent men, both of former ages and of the present times, stands in the foremost rank of civilized nations. What a man wishes anxiously, he seldom fails, at one period or other, to accomplish. An opportunity at length occurred—the situation of my private affairs, as well as of my public duties, admitted of my absence.

I embarked at Baltimore for Liverpool in the month of April, 1807. The vessel, which was a mere trader, and which had likewise some connexions at Calais, was to sail for Liverpool in the first instance, and thence, after the accomplishment of some private affairs, was to pass to Calais, and thence home. I do not profess to understand the business of merchants; but I must express my admiration at the ingenuity with which they defy and elude the laws of all countries. I suppose, however, that this is considered as perfectly consistent with mercantile honour. Every trader has a morality of his own; and without any intention of depreciating the mercantile class, so far I must be allowed to say, that the merchants are not very strict in their morality. Trade may improve the wealth of a nation, but it most certainly does not improve their morals.

The Captain with whom I sailed was a true character. Captain Eliab Jones, as he related his history to me, was the son of a very respectable clergyman in the West of England. His mother died when he was a boy about twelve years of age, leaving his father with a very large family. The father married again. Young Eliab either actually was, or fancifully believed himself to be, ill-treated by his step-mother. Under this real or imaginary suffering he eloped from his father's house; and making the best of his way for a sea-port, bound himself apprentice to the master of a coasting vessel. In this manner he continued to work, to use his own expressions, like a galley-slave for five years, when he obtained the situation of mate of an Indiaman. He progressively rose, till he happened unfortunately to quarrel with his Captain, which induced him to quit the service of the Company. In the course of his voyages to India, and in the Indian seas, he made what he thought an important discovery relative to the southern whale fishery: he communicated it to a mercantile house upon his return, and was employed by them in the speculation. He now, however, became unfortunate for the first time: his ship was wrecked off the island of Olaheite, and the crew and himself compelled to remain for two or three years on that barbarous but beautiful island.

Such is the outline of Captain Eliab's adventures, with the detail of which he amused me during our voyage. His character, however, deserves some mention. If there is an honest man under the canopy of Heaven, it was Captain Eliab; but his honesty was so plain and downright, so simple and unqualified, that I know not how to describe it than by the plain terms, that he was a strictly just and upright man....