Travels through the Empire of Morocco 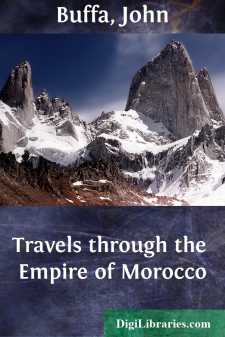 I have long felt very desirous to visit a country, which, notwithstanding the many revolutions it has undergone, and the enlightened characters of its conquerors, is regarded as still immersed in a degree of barbarism almost unparalleled. It appeared to me next to impossible that a nation so contiguous to Europe, with which it has for centuries maintained a constant intercourse, could have remained in a state of such profound ignorance.

Impressed with these ideas, I readily embraced the offer of a friend to accompany him from Gibraltar to this place, intending to travel further up the country, should I meet with sufficient inducement from the result of my observations here. We landed on the first of this month, and the intermediate time I have employed in obtaining information relative to the town of Tangiers from the earliest tradition to the present time. As the particulars I have collected do not appear devoid of Interest, I flatter myself, you will be gratified that I should have made them the subject of a letter.

This town, which by the ancients was called Tingis, or Tingir, and appears to have been the metropolis of the Western Mauritania, or Tingitania, as it was named, to distinguish it from Mauritania Cæsariensis; according to Pliny and others, was first founded ed fay Antæus (about a thousand years before Christ), the same who was afterwards conquered and slain by Hercules. The giant is supposed to have been buried here: and the report of Plutarch, that his tomb was opened by Sertorius, and a corpse sixty cubits or more in length, taken out of it, confirms the idea. But according to others, Tingis, or the present Tangiers, lays claim to a more ancient founder than Antæus. Procopius mentions, that in his time were standing two pillars of white stone, upon which were inscribed in the Phoenician characters the following words: "We are the Canaanites who fed from Joshua, the son of Nun."

A colony of Carthaginians settled here, and it is most probable that a flourishing trade was carried on by them, as the situation of Tangiers is extremely well adapted for that purpose. Indeed the name Tingis, in the language of the Phoenicians and Carthaginians, signifies an emporium. When the Mauritaniæ became subject to the Romans, in the reign of Julius Cæsar, Bocchus, the son-in-law of Jugurtha, having defeated Bogud, the king of Mauritania Tingitania, he became possessed of that country, and Augustus, or, as some say, Octavius, confirmed this acquisition to him; and the inhabitants of Tingis were allowed the privileges of Roman citizens.

I cannot discover any thing further remarkable of Tangiers from the time it became a Roman colony, and during the period it was possessed by the Saracens, till the latter end of the fourteenth century, when it was taken by the Portuguese, who erected fortifications and other public works....