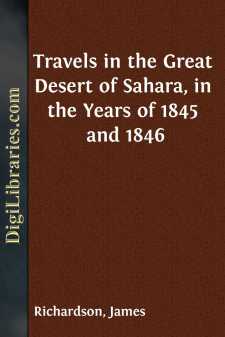 The sentiment of Antiquity—that "The life of no man is pleasing to the gods which is not useful to his fellows,"—has been my guiding principle of action during the last twelve years of my life. To live for my own simple and sole gratification, to have no other object in view but my own personal profit and renown, would be to me an intolerable existence. To be useful, or to attempt to be useful, in my day and generation, was the predominant motive which led me into The Desert, and sustained me there, alone and unprotected, during a long and perilous journey.

But, in presenting this work to the British public, I have to state, that it is only supplementary and fragmentary. If, therefore, any one were to judge of the results of my Saharan Tour merely by what is here given, he would do me a great injustice. I had expected, by this time, that certain Reports on the Commerce and Geography of The Great Desert, as well as a large Map of the Routes of this part of Africa, would have been given to the public. It is not my fault that their publication is still delayed. I can only regret it, because what I am now publishing comes first, instead of last, and consequently deranges my plan, the following pages being, indeed, supplementary to the Reports and Map. I come, therefore, before the public with no small disadvantage.

With regard to these supplementary and fragmentary extracts from my journal, I have also to state, they consist only of about two-thirds of the journal. For the present, I deemed it prudent to suppress the rest. But this likewise may disturb the harmony and mar the completeness of the work. However, if these portions of the journal are favourably received, other extracts may yet be published.

On entering The Desert, my principal object was to ascertain how and to what extent the Saharan Slave-Trade was carried on; although but a comparatively small portion of the following pages is devoted to this subject. I have already reported fully on this traffic, and it was unnecessary to go over the ground again, which might defeat, by disagreeable repetitions and endless details, the object which I have in view,—that of exciting an abhorrence of the Slave-Trade in the hearts of my fellow countrymen and countrywomen.

In these published extracts from my journal, I have endeavoured to give a truthful and faithful picture of the Saharan Tribes; their ideas, thoughts, words, and actions; and, where convenient, I have allowed them to speak and act for themselves. This is the main object which I have undertaken to accomplish in this Narrative of my Personal Adventures in The Sahara. The public must, and will, I doubt not, judge how far I have succeeded, and award me praise or blame, as may be my desert. If I have failed, I shall not abandon myself to despair, but shall console myself with the thought that I have done the best I was able to do under actual circumstances, and in my then state of health. It would, indeed, ill become me to shrink from public criticism, after having braved the terrors and hardships of The Desert. However, the publication of this journal may induce others to penetrate The Desert,—persons better qualified, and more ably and perfectly equipped than myself, and who may so accomplish something more permanently advantageous than what I have been able to compass. Acting, then, as pioneer to others, my Saharan labours will not be fruitless.

But, if any persons obstinately object to the style and matters of my Narrative of Desert Travel, I shall likewise as obstinately endeavour to hold my ground. To all such I say,—"Go to now, ye objectors and gainsayers, and do better." My mission was motu proprio, and I plunged in The Desert without your permission. But I am but one of the two hundred millions of Europe. You can surely get volunteers. You have the money, the rank, the patronage, and the learned and philanthropic Societies of Europe at your back. Send others; inspire them yourselves, and they may produce something which you like better than what I have given you. If I am not orthodox enough,—if I have not reviled the Deism of The Desert sufficiently to your taste,—send those who will. A little less zeal in Exeter Hall, and a little more in The Desert, would do neither you nor the world any harm....