Travels in the Far East 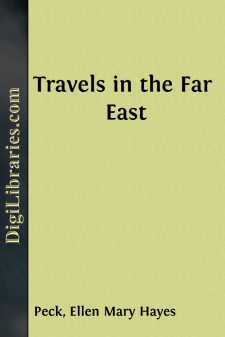 TRAVELS IN THE FAR EAST

MILWAUKEE, October 27th, 1907: The adieux have been said, the friends have departed, and the train is moving slowly out of the station; a profusion of flowers, tempting new books, and other gifts are visible proofs of the thoughtfulness of friends on the eve of a long journey in untried fields, and it seems as if I had lost my moorings and was drifting out on an unknown way.

Chicago is reached, and after a hurried transfer of trains I am speeding on to my objective point, New York. An interval of two days and there is a hurried departure for the pier and "the die is cast."

There is always a sense of exhilaration on the sailing of a steamer from New York, despite the sadness of the leave-taking; and the receipt of many gifts, telegrams, and letters keeps up the excitement until after the departure of the pilot. But as the shore line recedes and we drift out to sea, there comes a realization of an entire change of environment and of the rending of former interests, which is, of itself, a fine preparation for the mental equipment necessary to assimilate the new scenes to be visited.

The November Second party of Collver Tours "Round the World," sailing on the Friedrich der Grosse, North German Lloyd line, was to embrace ten individuals, aside from an accomplished Director, each to be independent of the other, but all supposed to fit into a harmonious whole. After the formal presentations were over, there came a sense of relief, for refined manners, culture, and the experience of much travel were apparent, and promised well for the months of companionship which were to ensue.

The localities represented by the several members in the party were as follows: Boston, three; Philadelphia, four; New York, one; Lafayette, Indiana, one; Ottawa, Illinois, one; and Milwaukee, Wisconsin, one. This is an indication of varied personality and diversified taste.

The elements did not prove propitious in the days that followed our departure, and we were forced to bear the stress of wind and storm with becoming resignation, feeling personally thankful for indemnity from fatal results. Such a voyage does not lend itself to much diversion or variety of interests, but there were the usual attempts at gayety in the line of dancing, music, and the exhilarating "Captain's dinner"; hence with congenial people the days were pleasantly whiled away. Among the fellow passengers were some former friends, but I will mention only those who in a sense belong to the public.

There was Mr. Edward P. Allis with his family; he was formerly of Milwaukee, but for many years has been a resident of Mentone, France, where he has continued his researches along biological lines, and where he has also superintended the publication of a valuable magazine relating to his special subject. I am happy to state that he has received, in consequence, distinguished recognition from the French Government, even the decoration of the Legion of Honor. He is also the recipient of orders from other foreign governments, and the Wisconsin University has conferred a high degree upon him....