Travels in Syria and the Holy Land 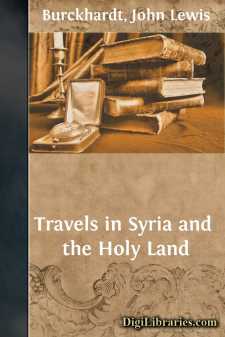 JOURNAL OF A TOUR FROM DAMASCUS

COUNTRIES OF THE LIBANUS, AND ANTI-LIBANUS. September 22, 1810.—I Left Damascus at four o'clock P.M. with a small caravan destined for Tripoli; passed SalehÃ­e, and beyond it a Kubbe,[Kubbe, a cupola supported by columns or walls; the sepulchre of a reputed saint.] from whence I had, near sun-set, a most beautiful view of the city of Damascus and its surrounding country. From the Kubbe, the road passes along the left side of the valley in which the Barrada runs, over uneven ground, which for the greater part is barren rock. After a ride of two hours and a quarter from Salehie, we descended to the river's side, and passed the Djissr [Djissr—Bridge.]

[p.2]Dumar; on the other side of which we encamped. It is a well-built bridge, with two archies, at twenty minutes distance from the village Dumar.

September 23.—We set off before daylight, crossing the mountains, in one of whose Wadys[Wady—Valley.] the Barrada winds along; we crossed it repeatedly, and after two hours arrived at the village Eldjdide [Arabic], built on the declivity of a hill near the source of one of the numerous rivulets that empty themselves into the Barrada. One hour and three quarters further, we descended into the Wady Barrada, near two villages, built on either side of the river, opposite to each other, called Souk Barrada.[Souk (market) is an appellation often added to villages, which have periodical markets.] The valley of the Barrada, up to Djissr Barrada, is full of fruit trees; and where its breadth permits, Dhourra and wheat are sown. Half an hour further, is Husseine, a small village in the lower part of the valley. Three-quarters of an hour, El Souk; here the Wady begins to be very narrow. A quarter of an hour beyond, turning round a steep rock, the valley presents a very wild and picturesque aspect. To the left, in the mountain, are six chambers cut in the rock; said to be the work of Christians, to whom the greater part of the ancient structures in Syria are ascribed. The river was not fordable here; and it would have taken me at least two hours to reach, by a circuitous route, the opposite mountains. A little way higher up is the Djissr el Souk, at the termination of the Wady; this bridge was built last year, as appears by an Arabic inscription on the rock near it. From the bridge the road leads up the side of the mountain, and enters, after half an hour's ride, upon a plain country. The river has a pretty cascade, near which are

[p.3] the remains of a bridge. The above mentioned plain is about three- quarters of an hour in breadth, and three hours in length; it is called Ard Zebdeni, or the district of Zebdeni; it is watered by the Barrada, one of whose sources is in the midst of it; and by the rivulet called Moiet[Moye—Water.] Zebdeni [Arabic], whose source is in the mountain, behind the village of the same name. The latter river, which empties itself into the Barrada, has, besides the source in the Ard Zebdeni, another of an equal size near Fidji, in a side branch of the Wady Barrada, half an hour from the village Husseine....