Travels in Peru, on the Coast, in the Sierra, Across the Cordilleras and the Andes, into the Primeval Forests 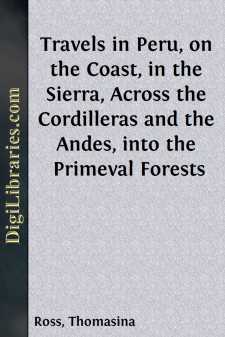 On the 27th of February, 1838, I sailed from Havre-de-Grace on board the "Edmond." This vessel, though a French merchantman, was freighted with a cargo of Swiss manufactured goods, suited to any commercial transactions which might be entered into in the course of a circumnavigatory voyage. It was a boisterous morning. A fall of snow and heavy clouds soon intercepted our view of the coast of France, and not one cheering sunbeam shone out to betoken for us a favorable voyage. We passed down the British Channel, where the multitude of vessels, and the flags of all nations, presented an enlivening picture, and we finally cleared it on the 5th of March. Favored by a brisk north wind, we soon reached Madeira and came in sight of Teneriffe, the peak being just perceptible on the skirt of the horizon. Easterly breezes soon brought us to the island of Fogo, which, having passed on the 35th day of our voyage, we received the usual marine baptism, and participated in all the ceremoniesobserved on crossing the equator. We soon reached the tropic of Capricorn, and endeavored to gain the channel between the Falkland Islands and Patagonia; but unfavorable winds obliged us to direct our course eastwards, from the Island of Soledad to the Staten Islands. On the 3d of March we made the longitude of Cape Horn, but were not able to double it until we got into the 60th degree of south latitude. In those dangerous waters, where it is admitted by the boldest English sailors that the waves rage more furiously than in any other part of the world, we encountered great risk and difficulty. For twenty-two days we were driven about on the fearfully agitated sea, southward of Tierra del Fuego, and were only saved from being buried in the deep, by the excellent build and soundness of our ship.

We suffered much, and were long delayed by this storm; but when it subsided, a smart breeze sprang up from the southward, and we held our course along the Pacific to the coast of Chile. After a voyage of 99 days we cast anchor on Sunday the 5th of June, in the Bay of San Carlos. Like the day of our departure from Europe, that of our arrival off Chiloe was gloomy and overcast. Heavy clouds obscured the long-looked-for island, and its picturesque shore could only be seen, when, at intervals, the wind dispersed the dark atmospheric veil. We had no sooner cast anchor than several boats came alongside rowed by Indians, who offered us potatoes, cabbage, fish, and water, in exchange for tobacco. Only those who have been long at sea can form an idea of the gratification which fresh provisions, especially vegetables, afford to the weary voyager....