Travels in Arabia; comprehending an account of those territories in Hedjaz which the Mohammedans regard as sacred 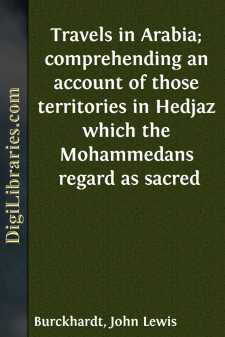 SOME years have now elapsed since two distinct portions of Burckhardt’s works (his Travels in Nubia and Syria) were offered to the public, and most favourably received; their success being insured not only by instrinsic merit, but by the celebrity of their editor as a scholar and antiquary, a traveller and a geographer. It must not however be inferred, from any delay in publishing the present volume, that its contents are less worthy of notice than those parts which have already proved so interesting and instructive to a multitude of readers. It was always intended that this Journal, and other writings of the same lamented author, should issue successively from the press: “There still remain,” says Colonel Leake, in his Preface to the Syrian Journal (p. ii.) “manuscripts sufficient to fill two volumes: one of these will consist of his Travels in Arabia, which were confined to the Hedjaz or Holy Land of the Muselmans, the part least accessible to Christians; the fourth volume will contain very copious remarks on the Arabs of the Desert, and particularly the Wahabys.”

[p.vi] Respecting the portion now before the reader, Colonel Leake, in another place, expresses a highly flattering opinion. “Burckhardt,” says he, “transmitted to the Association the most accurate and complete account of the Hedjaz, including the cities of Mekka and Medina, which has ever been received in Europe. His knowledge of the Arabic language, and of Mohammedan manners, had enabled him to assume the Muselman character with such success, that he resided at Mekka during the whole time of the pilgrimage, and passed through the various ceremonies of the occasion, without the smallest suspicion having arisen as to his real character.” (See the Life of Burckhardt prefixed to his Travels in Nubia, p. lvii. 4to. edition, 1819).

Recommended so strongly, the work of a less eminent traveller would be entitled to our notice: this presents itself with another claim; for the manuscript Journal was partly corrected and prepared for publication by the learned editor of Burckhardt’s former writings. But some important literary occupations prevented Colonel Leake from superintending the progress of this volume through the press. His plan, however, has been almost invariably adopted by the actual editor; particularly in expressing with scrupulous fidelity the author’s sentiments on all occasions, and in retaining, without any regard to mere elegance of style or selection of terms, his original language, wherever an alteration was not absolutely necessary to reconcile with our system of phraseology and grammatical construction certain foreign idioms which had crept into his English writings. [It was thought expedient, from circumstances of typographical convenience tending to facilitate and expedite the publication of this volume, that the Arabic characters which in the original manuscript follow immediately certain words, or appear between the lines or in the margin, should here be placed together at the end, as an Index, with references to the pages wherein they occur.]

[p.vii] The map prefixed to this volume might almost appear superfluous, since the positions of Djidda, Mekka, Medina, Tayf, and Yembo, the chief places of Hedjaz visited by Burckhardt, are indicated with accuracy in the excellent maps that illustrate his Nubian and Syrian Travels. But as the reader of this volume cannot reasonably be supposed to have constantly at hand, for immediate reference, the two former portions of our author’s works, a map is here given, in the construction and delineation of which Mr. Sydney Hall has attended to every suggestion offered by the editor: at whose recommendation the names of places are spelt after Burckhardt’s manner, however different from that more usual among us. [Thus in the map as in the letter-press of this volume, Mekka might have been spelt Mecca; and Hejaz, Jidda, Nejed, would as well express the proper sounds of those words as Hedjaz, Djidda, Nedjed; and at the same time approximate more closely to the original Arabic orthography, by which our English j (as in Jar, James, &c.) is represented without the assistance of a d; although the prefixing of this letter to the j might prevent a Frenchman from pronouncing it as in jour, jamais, &c.]

By the editor’s advice, also, several places situate beyond the Eastern limits of Hedjaz are included in this map; since Burckhardt, although he did not visit them himself, has given some original itineraries, in which they are mentioned....