by Karl Friedrich May 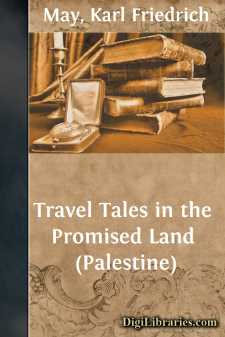 As soon as they step into my house and see my strange collection of travel keepsakes, all visitors’ eyes are drawn to the Arabian saddle, which actually deserves credit as the inspiration and author of this story. It has Oriental-red velvet, richly decorated with gold embroidery. This Pasha saddle was fit for a tribal Turkish chieftain, having comfortable stirrups and an accompanying dreadful bit that could conquer the stubborn resistance of even the mightiest horse.

My magnificent saddle was a present from Mustafa [Mohammed] Bustani, a wealthy merchant and friend who worked equally well with Arabs and Jews. His shop is on the right hand side of the Marketplace El Bizar, along the way to the third most sacred Islamic mosque, Harem Esh Sheriff, where the Israelite King Solomon’s Temple earlier stood. Try to understand the nature of Judaraber, these Arabs of the Holy Land who now live side-by-side with Jews. Little by little, they have given up their handed down-hatred against Hebrews, for they share the strict Old Testament views of “God’s Chosen People.” In this way, Judaraber are more inclined to think like Semites and less like those in Christendom.

With these Muslims, it is no more of a disgrace to become a Christian as to convert to Judaism. Anyway, this unique perspective only concerns inner opinions; especially regarding personal matters or simple business transactions, this peculiar outlook has hardly any influence. So, I was Mustafa Bustanis’ friend, in spite of religious differences, just because we liked each other. When I bought things in Jerusalem, I purchased solely from him whenever possible. I preferred to deal with him, not only as a merchant, but much more as a good human being. He too knew this truth, and he repaid me through our friendship’s deep affection. I felt that I possessed his complete trust and confidence.

I often stopped by his store, even if I had no particular reason to buy something. For many hours, we sat beside each other, reclining against a broad, Persian carpet-covered crate as we endlessly drank coffee that his African servant Bem prepared for us. We considered ourselves to be like brothers; thereto, we felt no need to keep secrets from each other. Every now and then, there were distinguished customers that he permitted to interrupt us. His assistant attended to them, even though he himself could have waited on them. Habakek was the name of Mustafa’s helper, an exceptionally good-natured fellow—a delightful combination of magician, jack-of-all-trades, and Renaissance man who could accomplish anything that your eyes could imagine.

Mustafa Bustani was a big fan of fairy tales. He loved to hear or tell every kind of fairy tale—most of all, one which involved a belief in miracles or a situation wherein the dead and the living played a dynamic role. Yet in no way was he superstitious in the general sense. On the contrary, he was an educated man who spoke Arabic, Turkish, and Persian; with Westerners, he could reasonably communicate in French and in English.

Concerning religious faith, he showed commendable tolerance; however, earlier in life it was the opposite case. He had a brother who was banished from the family, due to the fact that he had been baptized as a Christian. Mustafa did not conceal this fact; at the time, he had totally agreed with his exile.

In contrast to the past, he now seemed to think otherwise about that banishment....