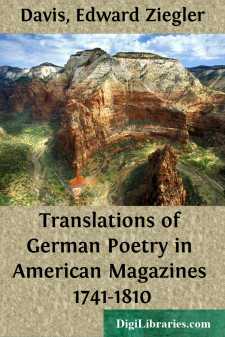 The important influence which German literature has exercised on American culture and literature extends from the early part of the nineteenth century. This influence was, in a measure, a continuation of the interest and activity that had existed in England during the last quarter of the eighteenth century. Prior to 1790, numerous translations from Gellert, Wieland, Klopstock, Lessing, Goethe and Schiller appeared from time to time, but it was not until William Taylor of Norwich began to write, that the movement, which culminated in the works of Coleridge, Carlyle and others, assumed definite form.

American literature at this time was still subservient to that of England and it is not surprising that the new literary impulse from Germany should have found reflection on this side of the Atlantic. This foreign influence was further aided by direct contact with Europe. By the second or third decade of the last century the studies of American scholars abroad became an important factor in our intellectual development. In 1819 Edward Everett returned from Europe to become professor of Greek at Harvard University. He had studied at the University of Göttingen, where he had become enthusiastic for the methods of German scholarship. While in Europe he secured for Harvard College a large number of German books, which soon proved to be a stimulus to the students of the institution. In 1823 W. E. Channing in his Remarks on National Literature advocated the study of French and German authors, so that our literature might attain a position of independence from that of England. Two years later, in 1825, Karl Follen entered upon his duties at Harvard College as instructor in German.

Before Edward Everett went abroad to study, however, American scholars had begun to seek wider cultural advantages at the centres of learning in Europe. They were mostly theological students, or men more or less closely connected with the diplomatic service. The most prominent among the latter class was John Quincy Adams, who spent several years in Europe. His interest in German literature is shown by the fact that he translated Wieland's Oberon, which however was not published, because Sotheby's translation had just appeared in London.

A little later, in 1809, Alexander Hill Everett went to Russia as secretary to the legation and spent several years in different cities on the continent. George Ticknor visited Germany in 1815 to prepare for his duties as professor of modern languages at Harvard; and George Bancroft, after graduating from college in 1817, studied for five years at Göttingen, Heidelberg and Berlin. Henry E. Dwight was at Göttingen from 1824-1828 and in the next year published in New York Travels in the North of Germany, 1825-6. It was about this time that James Fenimore Cooper began his European travels, which lasted from 1826 to 1833. Thus, American scholars had been acquiring German thought and culture at first hand, before Longfellow or Emerson went abroad for the first time....