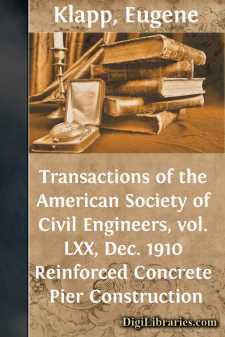 With Discussion by Messrs. William Arthur Payne, and Eugene Klapp.

A private yacht pier, built near Glen Cove, Long Island, has brought out a few points which may be of interest. It is an example of a small engineering structure, which, though of no great moment in itself, illustrates the adoption of means to an end that may be capable of very great extension.

The problem, as submitted to the writer, was to construct a yacht landing at East Island, on the exposed south shore of Long Island Sound, in connection with the construction at that point of an elaborate country residence. The slope of the beach at this point is very gradual, and it was specified that there should be a depth of at least 4 ft. of water at low tide. Soundings indicated that this necessitated a pier 300 ft. long. It was further specified that the pier should be to some extent in keeping with the scale of the place being created there, and that a wooden pile structure would not be acceptable. Besides these esthetic conditions, wooden piles were rejected because the teredo, in this part of the Sound, is very active. At the same time, the owner did not care to incur the expense of a masonry pier of the size involved. Also, it was desired to unload on the pier all material for the house and grounds during construction, and coal and other supplies thereafter, thus necessitating a pier wide enough to allow access for a cart and horse and to provide room for turning at the pier head.

Comparative designs and estimates were prepared for (a) a pier of ordinary construction, but with creosoted piles; (b) a concrete pier on concrete piles; and (c) for a series of concrete piers with wooden bridge connections. The latter plan was very much the best in appearance, and the calculated cost was less than that of the pier of concrete piles, and only slightly more than that of creosoted piles, the latter being only of a temporary nature in any case, as it has been found that the protection afforded by creosote against the teredo is not permanent.

At this point on the Sound the mean range of the tide is about 8 ft., and it was determined that at least 5 ft. above mean high water would be required to make the underside of the dock safe from wave action. There is a northeast exposure, with a long reach across the Sound, and the seas at times become quite heavy. These considerations, together with 4 ft. of water at low tide and from 2 to 3 ft. of toe-hold in the beach, required the outer caissons to be at least 20 ft. high.

To construct such piers in the ordinary manner behind coffer-dams, and in such an exposed location, was to involve expenditure far beyond that which the owner cared to incur. The writer's attention had shortly before been called to the successful use of reinforced concrete caissons on the Great Lakes for breakwater construction, by Major W.V. Judson, M. Am. Soc. C.E., and under patents held by that officer. It seemed that here was a solution of the problem. These caissons are constructed on the shore, preferably immediately adjoining the work....