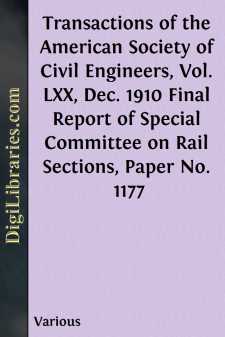 Your Special Committee on Steel Rails, since their appointment in 1902, have held numerous meetings, not only of their own body, but also in conference with Committees representing other Societies and the steel rail makers. The results of their deliberations have been presented to the Society in their reports presented on—

As previously reported to you, the Rail Committee of the American Railway Engineering and Maintenance of Way Association is also acting for the American Railway Association; and the latter organization has guaranteed to it the necessary funds to make exhaustive tests and observations as to the wear, breakage, etc., etc., of steel rails. This work is being prosecuted, and will of necessity require several years.

Your Committee feels that it has nothing to add to the several reports which it has presented to the Society, particularly as, so far, the several cardinal principles outlined in them are being practically followed in the several used and proposed specifications and rail sections.

In view of the foregoing, your Committee would respectfully ask to be discharged so that the field may be clear if at any future time the Society should desire to again place the subject in the hands of a Committee.

Approved in connection with the attached report:

I have signed the Report of the A. S. C. E. Rail Committee,—"Approved in connection with the attached report," as I feel that the report is too condensed, and assumes that all are familiar with the Rail situation, especially what has been done by the other Societies.

The work undertaken by this Committee has been delegated by The American Railway Association to the Rail Committee of The American Railway Engineering and Maintenance of Way Association, and it therefore seems appropriate to give the results of their work, up to date, to our members in convenient form for reference, especially as our rail specifications have not been worked to, and they have offered a better specification that will be worked to, and no doubt largely used by the members of this Society. The specification is attached to this report.

In presenting this specification to the Annual Meeting at Chicago in March last, the Committee said:

"A new specification should not be proposed at this time without careful consideration. So far as we know, no railroad company has purchased rails under the specifications approved by the American Railway Association and referred to us; nor do we know of any railway company that has succeeded in buying rails during the past two years according to a specification entirely satisfactory to the railroad company....