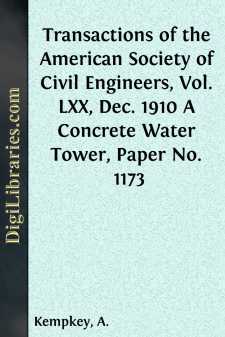 The City of Victoria is situated on the southern end of Vancouver Island, in the Province of British Columbia, Canada, and is the capital of the Province.

In common with all cities of the extreme West, its growth has been very rapid within the last few years. The population of the city proper, together with that of the municipality of Oak Bay, immediately adjacent, is now about 35,000.

The Victoria water-works are owned by the city and operated under the direction of a Water Commissioner appointed by the City Council. By special agreement, water is supplied to Oak Bay in bulk, this municipality having its own distributing system.

The rapid increase in population, together with the fact that in recent years very little had been done toward increasing the water supply, resulted in the necessity for remodeling the entire system, and there are very few cities where this would involve as many complex problems or a greater variety of work.

Water is drawn from Elk Lake, situated about five miles north of the city; thence it flows by gravity to the pumping station about four miles distant, and from there is pumped directly to the consumers.

The remodeling of the system, as recently completed, provided for:

1.—Increasing the capacity of Elk Lake by a system of levees.

2.—Increasing the capacity of the main to the pumping station by replacing about two miles of the old 16-in., wrought-iron, riveted pipe with 24-in. riveted steel pipe.

3.—Increasing the capacity of the pumping station by the installation of a 4,500,000-gal. pumping engine of the close-connected, cross-compound, Corliss, crank-and-fly-wheel type.

4.—The construction of a 20,000,000-gal. concrete-lined distributing reservoir in the city.

6.—The provision for a high-level service by means of an elevated tank of approximately 100,000 gal. capacity, water being supplied to the tank by two electrically-driven triplex pumps, each having a capacity of 100,000 gal. per 24 hours, against a dynamic head of 150 ft., and arranged to start and stop automatically with a variation of 3 ft. in the elevation of the water in the tank. These pumps are located about one mile from the tower, and are controlled by a float-operated auto-start, in the base of the tower.

A description of the elevated tank, which is novel in design, with the reasons for adopting the type of structure used, the method of construction, and the detailed cost, form the basis of this paper.

The tower is on the top of the highest hill in the city, in the heart of the most exclusive residential district, beautiful homes clustering about its base. The necessity for architectural treatment of the structure is thus seen to be of prime importance. In fact, the opposition of the local residents to the ordinary type of elevated tank, that is, latticed columns supporting a tank with a hemispherical bottom and a conical roof, rendered its use impossible, although tenders were invited on such a structure....