Transactions of the American Society of Civil Engineers, vol. LXVIII, Sept. 1910 The Site of the Terminal Station. Paper No. 1157 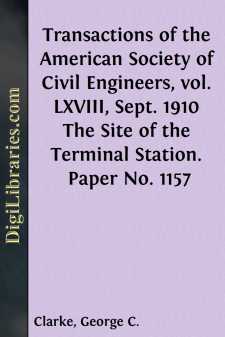 The purpose of this paper is to describe the preliminary work for and the preparation of that portion of the site for the Terminal Station in Manhattan, of the New York Tunnel Extension of the Pennsylvania Railroad, which was constructed under the direction of the Chief Engineer of the East River Division, including the disposal of material excavated from all parts of the Terminal construction and the tunnels on the East River Division.

In June, 1903, when the writer's connection with the work began, the preliminary surveys had been completed and the location and extent of the Terminal track area had been fixed, in so far as the city blocks to be occupied were concerned. This contemplated area, however, did not include the portion between Ninth and Tenth Avenues, that being added subsequently. The elevation of the track level had also been fixed by the requirement in the agreement with the City that no part of the permanent structure should approach within 19 ft. of the surface under any avenue or under any street except within the Terminal area. The nearest approach of the tracks to the surface is at a point 320 ft....