Tramping Through Mexico, Guatemala and Honduras - Being the Random Notes of an Incurable Vagabond 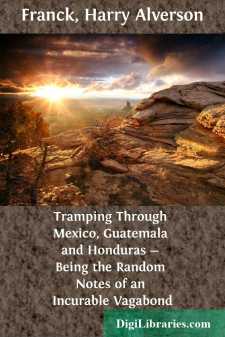 CHAPTER I INTO THE COOLER SOUTH

You are really in Mexico before you get there. Laredo is a purely—though not pure—Mexican town with a slight American tinge. Scores of dull-skinned men wander listlessly about trying to sell sticks of candy and the like from boards carried on their heads. There are not a dozen shops where the clerks speak even good pidgin English, most signs are in Spanish, the lists of voters on the walls are chiefly of Iberian origin, the very county officers from sheriff down—or up—are names the average American could not pronounce, and the saunterer in the streets may pass hours without hearing a word of English. Even the post-office employees speak Spanish by preference and I could not do the simplest business without resorting to that tongue. I am fond of Spanish, but I do not relish being forced to use it in my own country.

On Laredo's rare breeze rides enough dust to build a new world. Every street is inches deep in it, everything in town, including the minds of the inhabitants, is covered with it. As to heat—"Cincinnati Slim" put it in a nutshell even as we wandered in from the cattleyards where the freight train had dropped us in the small hours: "If ever hell gets full this'll do fine for an annex."

Luckily my window in the ruin that masqueraded as a hotel faced such wind as existed. The only person I saw in that institution during twenty-four hours there was a little Mexican boy with a hand-broom, which he evidently carried as an ornament or a sign of office. It seemed a pity not to let Mexico have the dust-laden, sweltering place if they want it so badly.

I had not intended to lug into Mexico such a load as I did. But it was a Jewish holiday, and the pawnshops were closed. As I passed the lodge on the north end of the bridge over the languid, brown Rio Grande it was a genuine American voice that snapped: "Heh! A nickel!"

Just beyond, but thirty-six minutes earlier, the Mexican official stopped me with far more courtesy, and peered down into the corners of my battered "telescope" without disturbing the contents.

"No revólver?" he queried suspiciously.

"No, señor," I answered, keeping the coat on my arm unostentatiously over my hip pocket. It wasn't a revolver; it was an automatic.

The man who baedekerized Mexico says Nuevo Laredo is not the place to judge that country. I was glad to hear it. Its imitation of a street-car, eight feet long, was manned by two tawny children without uniforms, nor any great amount of substitute for them, who smoked cigarettes incessantly as we crawled dustily through the baked-mud hamlet to the decrepit shed that announced itself the station of the National Railways of Mexico. It was closed, of course. I waited an hour or more before two officials resplendent in uniforms drifted in to take up the waiting where I had left off. But it was a real train that pulled in toward three, from far-off St. Louis, even if it had hooked on behind a second-class car with long wooden benches....