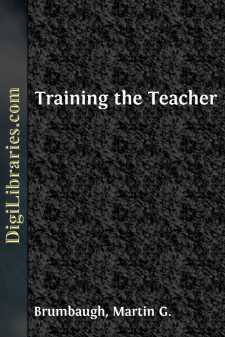 1. Methods of Bible Study.—Microscopic study of the Bible is the study of smaller portions, such as single verses, or parts of chapters. Many sermons adopt this method. It is good for many purposes. But it fails to give the larger views of Bible history that the teacher needs for effective work. The telescopic method takes in large sections of the Word, and considers them in their relation to the whole of revelation. This is the method that will be adopted in these studies.

2. To assist in the study of a general survey of Bible history, we give as a memory outline above a chart of the centuries between Adam and Christ. We use in this the chronology in our Bibles, not because it is correct, but because scholars have not yet agreed on a better, especially for the ages before Abraham.

All the names are well-known but that of Jared, and his is put in merely to mark the close of the first half-millennium. Memorize these names so that you can reproduce the chart without looking at the book. This exercise of memory will enable you to locate the chief events of Bible history roughly in their appropriate chronological environment. Are you reading about any event in the wanderings of Israel? Of course you are between the letters M. and S. Is it a story of Elijah that you are studying? Then the event must lie between the letters S. and Z. Or is it the biography of Nehemiah that forms your lesson? Then it must lie to the right of the letter Z.

3. One peculiarity of the Bible narrative is that at times it is quite diffuse, and covers much space on the sacred page, while at other times it is most highly condensed. For example, the first twelve chapters of Genesis cover over 2000 years at the lowest computation. All the rest of Genesis (thirty-eight chapters) covers the lives of four men, Abraham, Isaac, Jacob, and Joseph. The first chapter of Exodus covers centuries while all the rest of Exodus, all of Leviticus, all of Numbers and all of Deuteronomy cover only forty years. Surely there must be some good reason for this. Again, two chapters in Matthew and two in Luke cover thirty years of our Lord's life, while all the rest of the four Gospels cover only three and a half years.

4. Another peculiarity of the Word is that the miraculous element is very unevenly distributed. At times miracles abound, and at other times they are but few in number. In the first eleven chapters of Genesis, covering more than 2000 years, there are few miracles, outside of those of the creation. But in the period after that, covered by the four great Patriarchs, we find more miracles than before.

During the Mosaic period, beginning with Exodus 2, we find that miracles begin to multiply as never before. For instance, God fed his people for forty years (except on the Sabbath) with manna. Again, in the times of Elijah and Elisha, the narrative amplifies, and the miracles multiply. And once more when we come to the Messianic period, as exemplified in the story of Christ, the narrative becomes fourfold, and the miracles multiply as never before. What is the reason for this amplification of narrative and simultaneous multiplication of the miraculous? It is because these periods were exceptionally significant. In them God was trying to teach men lessons of peculiar importance. So he led the writers to tell the story more in full, and he himself emphasized the teaching by his own Divine interposition.

5. In the Patriarchal period God was calling out him who was to be the founder of that people which was to preserve God's law through the ages, and from whom at last was to come Jesus, the Redeemer of the world. This was a most important period, and one with which we might well become acquainted.

6. In the Mosaic period God was bringing out his people from bondage and was giving to them laws that were to shape their national life for all time. He was also giving to them a typology in high priest, tabernacle, and sacrifice that was to lead them in the way of truth until, in the fulness of the time, he was to come who was the fulfilment of both law and type, Jesus of Nazareth, the Lamb of God, and the Son of God.

7. In the period of Elijah and his great pupil, Elisha, God was making a great effort to call back to himself Israel, or the Northern Kingdom, which had been led into gross idolatry by Jeroboam, and later by Ahab.

8. In the Messianic period God was fulfilling all that he had promised from the beginning as to a Redeemer who was to come. He who had spoken to the fathers through the prophets, and the various types, was now to speak to men through the person of his Son. Good reason then why, at the four periods to which we have called attention, God should provide that the narrative should be more full than at other times, and that simultaneously there should be the marked intervention of the miraculous, to prove that God was truly speaking to men, and giving them divine directions as to how to act, and what to believe....