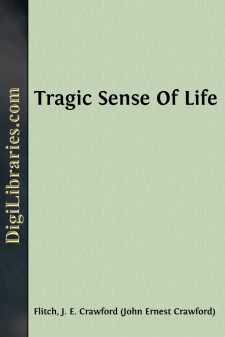 I sat, several years ago, at the Welsh National Eisteddfod, under the vast tent in which the Bard of Wales was being crowned. After the small golden crown had been placed in unsteady equilibrium on the head of a clever-looking pressman, several Welsh bards came on the platform and recited little epigrams. A Welsh bard is, if young, a pressman, and if of maturer years, a divine. In this case, as England was at war, they were all of the maturer kind, and, while I listened to the music of their ditties—the sense thereof being, alas! beyond my reach—I was struck by the fact that all of them, though different, closely resembled Don Miguel de Unamuno. It is not my purpose to enter into the wasp-nest of racial disquisitions. If there is a race in the world over which more sense and more nonsense can be freely said for lack of definite information than the Welsh, it is surely this ancient Basque people, whose greatest contemporary figure is perhaps Don Miguel de Unamuno. I am merely setting down that intuitional fact for what it may be worth, though I do not hide my opinion that such promptings of the inner, untutored man are worth more than cavefuls of bones and tombfuls of undecipherable papers.

This reminiscence, moreover, which springs up into the light of my memory every time I think of Don Miguel de Unamuno, has to my mind a further value in that in it the image of Don Miguel does not appear as evoked by one man, but by many, though many of one species, many who in depth are but one man, one type, the Welsh divine. Now, this unity underlying a multiplicity, these many faces, moods, and movements, traceable to one only type, I find deeply connected in my mind with Unamuno's person and with what he signifies in Spanish life and letters. And when I further delve into my impression, I first realize an undoubtedly physical relation between the many-one Welsh divines and the many-one Unamuno. A tall, broad-shouldered, bony man, with high cheeks, a beak-like nose, pointed grey beard, and a complexion the colour of the red hematites on which Bilbao, his native town, is built, and which Bilbao ruthlessly plucks from its very body to exchange for gold in the markets of England—and in the deep sockets under the high aggressive forehead prolonged by short iron-grey hair, two eyes like gimlets eagerly watching the world through spectacles which seem to be purposely pointed at the object like microscopes; a fighting expression, but of noble fighting, above the prizes of the passing world, the contempt for which is shown in a peculiar attire whose blackness invades even that little triangle of white which worldly men leave on their breast for the necktie of frivolity and the decorations of vanity, and, blinding it, leaves but the thinnest rim of white collar to emphasize, rather than relieve, the priestly effect of the whole. Such is Don Miguel de Unamuno.

Such is, rather, his photograph. For Unamuno himself is ever changing. A talker, as all good Spaniards are nowadays, but a talker in earnest and with his heart in it, he is varied, like the subjects of his conversation, and, still more, like the passions which they awake in him....