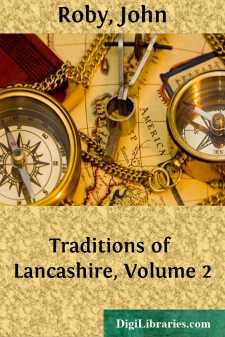 The ancient mansion of Healey Hall was a cumbrous inconvenient dwelling of timber; but the spirit of improvement having gone forth in the reign of Elizabeth, an ordinary hall-house of stone was erected, about the year 1620, by Oliver Chadwick. On the south front was a projecting wing and three gables, with a large hall-window. The north front had two gables only, with a projecting barn. The north entrance, covered by a porch, was a thorough passage, answering to the screens of a college, having on one side the hall and parlour beyond; on the other were the kitchen, buttery, &c. On the river below was a corn-mill; this and a huge barn being necessary appendages to the hospitable mansions and plentiful boards of our forefathers. Over the front door was this inscription—

About the year 1756 the east wall gave way, and a considerable fishure appeared on the outside. This event was considered by many as the usual foretokening that its owner, Charles Chadwick, of Healey and Ridware, would speedily be removed by death from the seat of his ancestors; and so it proved, for in the course of a few months he died at Lichfield, aged eighty-two. His great age, though, will be thought the more probable token, the surer presage of approaching dissolution.

On a stone near the top of the building, on the north side, a human head was rudely carved in relief, which tradition affirms to have been a memorial of one of the workmen, accidentally killed while the house was building.

In 1773, the existing edifice was built, on the ancient site, by John Chadwick, grandfather to the present owner

In Corry's Lancashire is the following document, furnished by the recent possessor, Charles Chadwick, Esq. It relates to the foregoing John Chadwick, his father—

"In 1745, at the rebellion, when the Pretender's son and his Highlanders reached Manchester, having obtained a list of the loyal subscribers, they began (of course) to enforce the payment of the money for their own use. An officer of the belted plaid, of the second division, came to the house of Mr C., in King Street, whilst the master of it was with his father at Ridware, and, on being told that he was from home, and his lady ill in bed, he went up-stairs, and opening the chamber-door, where she was then lying-in, beckoned her sister to come to him on the stairs, where he told her (in a mild but decided tone) that the money before mentioned must be paid quickly for the use of 'the prince (who lodged at the house in Market Street, now called the Palace Inn), or the house would be burnt down.' In this dilemma, the man-midwife calling first, and afterwards the physician, were both consulted by the ladies; when the former (a Tory) advised to send the money after them, whilst the latter (a Whig) thought it better to keep it till called for; consequently, never being called for in their hasty retreat, the money was not paid. It may be proper to add, Captain Lachlan MacLachlan, of the first division (afterwards one of the proscribed), being quartered in the same house, behaved with the greatest civility and politeness. On a party of horse coming to the door for quarters, he called for a lanthorn, and, though he had a cold (for which white wine whey was offered him, which he called 'varra good stuff'), walked as far as Salford, and there quartered them; two of his Highlanders, in the meantime, were dancing reels in the kitchen, and in the morning gave each of the maids sixpence at parting."

The name Healey Dene denotes a valley or dale, convallis, enclosed on both sides with steep hills; dene being a Saxon word, signifying a narrow valley, with woods and streams of water convenient for the feeding of cattle. Here the river Spodden, which now keeps many fulling-mills and engines at work, formerly turned one solitary corn-mill only. It was built in the narrow dingle below the hall, for the supply of the hamlet. The feudal owners of most mansions usually erected corn-mills (where practicable) within their own demesnes. After the family had removed to the more mild and temperate climate of Mavesyn-Ridware, in Staffordshire, about the year 1636, Healey Mill was converted into a fulling-mill, so that one of the principal features in our story no longer exists.

About two miles north from Rochdale lies the hamlet of Healey, a high tract of land, as its Saxon derivation seems to imply, heaÊ“e, high, and leaÊ“ a pasture, signifying the "high pasture."

Our Saxon ancestors chiefly occupied their lands for grazing purposes; hence the many terminations in ley, or leaÊ“. Pasturage is still called a "ley" for cattle in these parts.

In this remote hamlet dwelt a family, probably of Saxon origin, whose name, De Heley, from their place of residence, had, in all likelihood, been assumed soon after the Norman conquest....