Trade and Travel in the Far East or Recollections of twenty-one years passed in Java, Singapore, Australia and China. 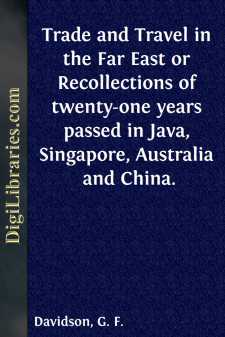 The following pages were written to beguile the tediousness of a long voyage from Hong Kong to England, during the spring and summer of 1844. When I state, that the whole was written with the paper on my knee, for want of a desk, amid continual interruptions from three young children lacking amusement during their long confinement on ship-board, and with a perpetual liability to be pitched to leeward, paper and all,—I shall have said enough to bespeak from every good-natured reader a candid allowance for whatever defects may attach to the composition. It is necessary, however, that I should also premise, that the sketches are drawn entirely from memory, and that the incidents referred to in the earlier chapters, took place some twenty years ago. That my recollection may have proved treacherous on some minor points, is very possible; but, whatever may be the merits or demerits of the work in other respects, it contains, to the best of my knowledge and belief, nothing but truth in the strictest sense of that term; and, as imbodying the result of my own personal observations in the countries visited, it may possess an interest on that account, not always attaching to volumes of higher pretensions.

My wanderings have been neither few nor short, and, perhaps, verify the old proverb, that a rolling stone gathers no moss. I have crossed the Ocean in forty different square-rigged vessels; have trod the plains of Hindostan, the wilds of Sumatra, and the mountains of Java; have strolled among the beautiful hills and dales of Singapore and Penang; have had many a gallop amid the forests and plains of Australia; have passed through the labyrinth of reefs forming Torres' Straits; and have visited the far-famed Celestial Empire. My first idea, in endeavouring to retrace my journeyings and adventures, was, that the personal narrative might serve to amuse a circle of private friends. But the notices relating to the openings for Trade in the Far East, and to the subject of Emigration, together with the free strictures upon the causes of the recent depression in our Australian colonies, will, I venture to hope, be not unacceptable to those who are interested in the extension of British commerce, and in the well-being of the rising communities which form an integral part of the mighty Empire now encircling the Globe.

Some parts of the work refer to coming events as probable, which have since become matters of fact; but I have not deemed it necessary to suppress or to alter what I had written. I am more especially happy to find that my suggestions respecting Borneo have, to some extent, been anticipated; and that the important discovery of its coal-mines has been taken advantage of by Her Majesty's Government in the very way pointed out in observations written at sea fifteen months ago. Since my arrival in England, I have learned also, that the feasibility of the navigation of Torres' Straits from west to east, has struck others more competent to form a correct judgment than myself....