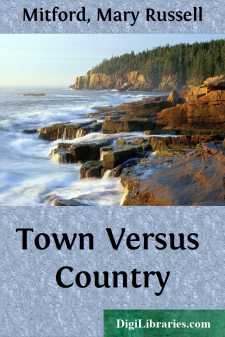 "I'm desperately afear'd, Sue, that that brother of thine will turn out a jackanapes," was the apostrophe of the good yeoman Michael Howe, to his pretty daughter Susan, as they were walking one fine afternoon in harvest through some narrow and richly wooded lanes, which wound between the crofts of his farm of Rutherford West, situate in that out-of-the-way part of Berkshire which is emphatically called "the Low Country," for no better reason that I can discover than that it is the very hilliest part of the royal county. "I'm sadly afear'd, Sue, that he'll turn out a jackanapes!"—and the stout farmer brandished the tall paddle which served him at once as a walking stick and a weeding-hook, and began vigorously eradicating the huge thistles which grew by the roadside, as a mere vent for his vexation. "You'll see that he'll come back an arrant puppy," quoth Michael Howe.

"Oh, father! don't say so," rejoined Susan, "why should you think so hardly of poor William—our own dear William, whom we have not seen these three years? What earthly harm has he done?"

"Harm, girl! Look at his letters! You know you're ashamed yourself to take 'em of the postman. Pink paper, forsooth, and blue ink, and a seal with bits of make-believe gold speckled about in it like a ladybird's wings—I hate all make-believes, all shams; they're worse than poison;—and stinking of some outlandish scent, so that I'm forced to smoke a couple of pipes extra to get rid of the smell; and latterly, as if this folly was not enough, he has crammed these precious scrawls into a sort of paper-bag, pasted together just as if o' purpose to make us pay double postage. Jackanapes did I call him? He's a worse mollycot than a woman."

"Dear father, all young men will be foolish one way or another; and you know my uncle says, that William is wonderfully steady for so young a man, and his master is so well pleased with him, that he is now foreman in his great concern. You must pardon a little nonsense in a country youth, thrown suddenly into a fine shop in the gayest part of London, and with his godfather's legacy coming unexpectedly upon him, and making him too rich for a journeyman tradesman. But he's coming to see us now. He would have come six months ago, as soon as he got this money, if his master could have spared him; and he'll be wiser before he goes back to London."

"Not he. Hang; Lunnon! Why did he go to Lunnon at all? Why could not he stop at Rutherford like his father and his father's father, and see to the farm? What business had he in a great shop?—a man-mercer's they call it What call had he to Lunnon, I say? Tell me that, Miss Susan.

"Why, dear father, you know very well that when Master George Arnot was so unluckily obstinate about the affair of the water-course, and would go to law with you, and swore that instead of marrying William, poor Mary should be married to the rich maltster old Jacob Giles, William, who had loved Mary ever since they were children together, could not bear to stay in the country, and went off to my uncle, forbidding me ever to mention her name in a letter; and,—" "Well! well!" rejoined the father, somewhat softened, "but he need not have turned puppy and coxcomb because he was crossed in love. Pshaw!" added the good farmer, giving a mighty tug with his paddle at a tough mullein which happened to stand in his way, "I was crossed in love myself, in my young days, but I did not run off and turn tailor. I made up plump to another wench—your poor mother, Susan, that's dead and gone—and carried her off like a man; married her in a month, girl; and that's what Will should have done. I'm afear'd we shall find him a sad jackanapes. Jem Hathaway, the gauger, told me last market-day that he saw him one Sunday in the what-dye-call't—the Park there, covered with rings, and gold chains, and fine velvets—all green and gold, like our great peacock....