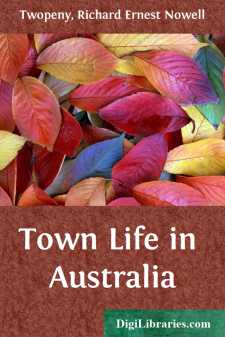 A WALK ROUND MELBOURNE.

Although most educated people know that Melbourne, Sydney, and Adelaide are populous towns, I should doubt whether one Englishman, who has not been to Australia, out of a hundred realizes that fact. I well remember that, although I had taken some trouble to read up information about Melbourne, I was never more thoroughly surprised than during the first few hours after my arrival there. And I hear almost everyone who comes out from England say that his experience has been the same as my own. In one sense the visitor is disappointed with his first day in an Australian city. The novelties and the differences from the Old Country do not strike him nearly so much as the resemblances. It is only as he gets to know the place better that he begins to to notice the differences. The first prevailing impression is that a slice of Liverpool has been bodily transplanted to the Antipodes, that you must have landed in England again by mistake, and it is only by degrees that you begin to see that the resemblance is more superficial than real.

Although Sydney is the older town, Melbourne is justly entitled to be considered the metropolis of the Southern Hemisphere. The natural beauties of Sydney are worth coming all the way to Australia to see; while the situation of Melbourne is commonplace if not actually ugly; but it is in the Victorian city that the trade and capital, the business and pleasure of Australia chiefly centre. Is there a company to be got up to stock the wilds of Western Australia, or to form a railway on the land-grant system in Queensland, to introduce the electric light, or to spread education amongst the black fellows, the promoters either belong to Melbourne, or go there for their capital. The headquarters of nearly all the large commercial institutions which extend their operation beyond the limits of any one colony are to be found there. If you wish to transact business well and quickly, to organize a new enterprise--in short, to estimate and understand the trade of Australia, you must go to Melbourne and not to Sydney, and this in spite of the fact that Victoria is a small colony handicapped by heavy protectionist duties, whilst Sydney is, comparatively speaking, a free port, at the base of an enormous area. The actual production does not take place in Victoria, but it is in Melbourne that the money resulting from the productions of other colonies as well as of Victoria is turned over. It is Melbourne money chiefly that opens up new tracts of land for settlement in the interior of the continent, and Melbourne brains that find the outlets for fresh commerce in every direction. There is a bustle and life about Melbourne which you altogether miss in Sydney. The Melbourne man is always on the look-out for business, the Sydney man waits for business to come to him. The one is always in a hurry, the other takes life more easily. And as it is with business, so it is with pleasure.

If you are a man of leisure you will find more society in Melbourne, more balls and parties, a larger measure of intellectual life--i.e., more books and men of education and intellect, more and better theatrical and musical performances, more racing and cricket, football, and athletic clubs, a larger leisured class than in Sydney....