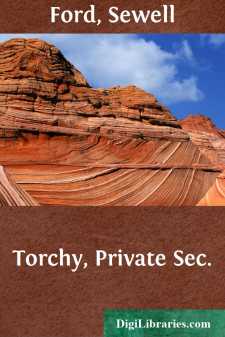 CHAPTER I THE UP CALL FOR TORCHY

Well, it's come! Uh-huh! And sudden, too, like I knew it would, if it came at all. No climbin' the ladder for me, not while they run express elevators. And, believe me, when the gate opened, I was right there with my foot out.

It was like this: One mornin' I'm in my old place behind the brass rail, at the jump-end of the buzzer. I'm everybody's slave in general, and Piddie's football in particular. You know—head office boy of the Corrugated Trust.

That's description enough, ain't it? And I'd been there so long—— Honest, when I first went on the job I used to sneak the city directory under the chair so my toes could touch. Now my knees rub the under-side of the desk. Familiar with the place? Say, there are just seventeen floor cracks between me and the opposite wall; it's fifty-eight steps through into Old Hickory's roll-top and back; and the ink I've poured into all them desk-wells would be enough to float a ferry-boat.

At 8.30 on this special mornin' there I am, as I said; and at 2.21 p.m. the same day I'm—— Well, of course, there was a few preliminaries, though I didn't tag 'em as such when they come along. I expect the new spring costume helped some. And the shave—oh, I was goin' it strong! No cut-price, closing-out, House-of-Smartheimer bargain, altered free to fit—not so, Lobelia! Why, I pawed over whole bales of stuff in a sure-enough Fifth-ave. tailor works; had blueprint plans of the front and side elevations drawn, even to the number of buttons on the cuffs, and spent three diff'rent noon hours havin' it modeled on me before they could pull a single bastin' thread.

But it's some stream line effect at the finish, take it from me! Nothing sporty or cake-walky, you understand: just quiet and dignified and rich-like, same as any second vice or gen'ral manager would wear. Two-button sack with wide English roll and no turn-up to the trousers—oh, I should ripple!

The shave was an afterthought. I'd worked up to it by havin' some of my lurid locks trimmed, and as Giuseppe quits shearin' and asks if there'll be anything else I rubs my hand casual across my jaw and remarks:

"Could you find anything there to mow with a razor?"

Could he? He'd go through the motions on a glass doorknob!

Then it's me tilted back with my heels up and the suds artist decoratin' my map until it looks like a Polish weddin' cake. Don't it hit you foolish the first time, though? I felt like everybody in the shop, includin' the brush boy and the battery of lady manicures, was all gathered around pipin' me off as a raw beginner. So I stares haughty at the ceilin' and tries to put on a bored look.

I'd been scraped twice over, and was just bein' unwrapped from the hot towel, when I turns to see who it is has camped down in the next chair, and finds Mr. Robert gazin' at me curious.