Torchy As A Pa 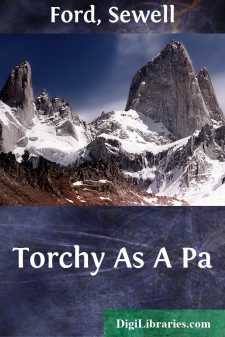 CHAPTER I VEE TIES SOMETHING LOOSE

I forget just what it was Vee was rummagin' for in the drawer of her writin' desk. Might have been last month's milk bill, or a stray hair net, or the plans and specifications for buildin' a spiced layer cake with only two eggs. Anyway, right in the middle of the hunt she cuts loose with the staccato stuff, indicatin' surprise, remorse, sudden grief and other emotions.

"Silly!" says she. "Look what I ran across, Torchy." And she flips an engraved card at me.

I picks it on the fly, reads the neat script on it, and then hunches my shoulders. "Well, well!" says I. "At home after September 15, 309 West Hundred and Umpty Umpt street. How interestin'! But who is this Mr. and Mrs. Hamilton Porter Blake, anyway?"

"Why, don't you remember?" says Vee. "We sent them that darling urn-shaped candy jar. That is Lucy Lee and her dear Captain."

"Oh, then she got him, did she?" says I. "I knew he was a goner when she went after him so strong. And now I expect they're livin' happy ever after?"

Maybe you don't remember my tellin' you about Lucy Lee, the Virginia butterfly we took in over the week-end once and how I had to scratch around one Saturday to find some male dinner mate for her, and picked this hard-boiled egg from the bond room, one of these buddin' John D.'s who keeps an expense account and shudders every time he passes a millinery store or thinks what two orchestra seats and a double taxi fare would set him back. And, the female being the more expensive of the species, he has trained himself to be girl proof. That's what he lets on to me beforehand, but inside of forty-eight minutes by the watch, or between his first spoonful of tomato soup and his last sip of cafe noir, this Lucy Lee party had him so dizzy in the head he didn't know whether he was gazin' into her lovely eyes or being run down by a truck. Honest, some of these babidolls with high voltage lamps like that ought to be made to use dimmers. For look! Just as she's got him all wound up in the net, what does Lucy Lee do but flit sudden off to the Berkshires, where a noble young S. O. S. captain has just come back from the war and the next we know they're engaged, while in the bond room of the Corrugated Trust is one more broken heart, or what passes for the same among them young hicks.

And now here is Lucy Lee, flaggin' as young Mrs. Blake, livin' right in the same town with him.

"How stupid of me to forget!" says Vee. "We must run in and call on them right away, Torchy."

"We'll have dinner first at that cute little Cafe Bretone you've been telling me about," says Vee, "and go up to see the Blakes afterwards."

Yes, that was the program we followed. And without the aid of a guide we located this Umpty Umpt street. The number is about half way down the block that runs from upper Broadway to Riverside Drive. It's one of the narrow streets, you know, and the scenery is just as cheerful as a section of the Hudson River tube on a foggy night....