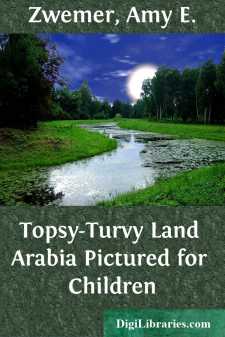 I WHY IS ARABIA TOPSY-TURVY LAND?

On this big round earth there are all sorts of countries and peoples. Men walk on it on every side just like flies crawling over a watermelon and they do not fall off either. On the next page you can see how they travel all around the world; some in steamships, some in carriages or on horses, some in jinrickshaws and some in the railway coaches. In Topsy-turvy Land they have no railroads and not even waggon-roads or waggons. A horse or a camel or a donkey is used for passengers and the camel caravan is a freight train.

Or if you wish, the camel is a topsy-turvy ship which sails in the sand instead of in the water. It is called the ship of the desert. The masts point down instead of up; there are four masts instead of three; and although there are ropes the desert-ship has no sails and no rudder—unless the rudder be the tail. When the ship lies at anchor to be loaded it feeds on grass and the four masts are all snugly tucked away under the hull. In Arabia you generally see these ships of the desert in a long line like a naval procession, each battleship towing its mate by a piece of rope fastened from halter to tail! But not only is the mode of travel strange in Topsy-turvy Land, even the time of the day is all upside down. When the boys and girls of America are going to bed the boys and girls of Arabia are thinking of getting up. As early as four o'clock by western time the muezzin calls out loud from the top of the minaret (for Moslem churches have no steeples and no bells) to come and pray. Arabs count the hours from sunrise. It is noon at six o'clock and they breakfast at one; at three o'clock in the evening all good boys and girls are asleep.

In Topsy-turvy Land all the habits and customs are exactly opposite to those in America or England. For instance when a boy enters a room he takes off his shoes but leaves his hat on his head. I do not know whether we should call it a hat, however. His hat has no rim and is not made of felt or straw, but is just a folded handkerchief of a large size and bright colour with a piece of cord to hold it wound round his head—a sort of a hat in two pieces. The girls go without shoes but carefully cover their pretty (or ugly) faces with a black veil.

At home you eat with a spoon or use a knife and fork. Here the Arabs eat with their fingers; nor do they use any plates or butter dishes, but a large piece of flat bread serves as a plate until it is all eaten. So you see in Arabia the children not only eat their rice and meat but their plates also. You read a book from left to right but in Arabia everybody begins at the right-hand cover and reads backward. Even the lines read backward and in Arabic writing there are no commas or capitals and the vowels are written not next to the consonants but stuck up above them. Potato in Arabic would be written with English letters this way:

Can you read it?

In your country a carpenter stands at his bench to work, but here they sit on the ground....