Tom, The Bootblack or, The Road to Success 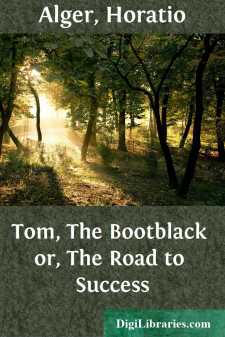 "How do you feel this morning, Jacob?" asked a boy of fifteen, bending over an old man crouched in the corner of an upper room, in a poor tenement-house, distant less than a quarter of a mile from the New York City Hall.

"Never you mind about that, Jacob. I can earn money enough for both of us. Come, now, you'd like some coffee and eggs, wouldn't you?"

There was a look of eager appetite in the old man's eyes as he heard the boy speak.

"Don't you be afraid of that. I'll go and ask Mrs. Flanagan to get some ready at once. I've earned thirty cents this morning already, Jacob, and that'll pay for breakfast for the two of us. I think I could eat some breakfast myself."

Jacob uttered a feeble remonstrance, but the boy did not stop to hear it. He went down the rough staircase, and knocked at the door of the room below. It was opened by a stout, wholesome-looking Irish woman, who saluted the boy heartily.

"Well, Tom, and how's your grandfather this mornin'?"

"He's weak, Mrs. Flanagan; but he'll be the better for some breakfast, and so shall I. I'll go and buy half a dozen eggs, if you'll be kind enough to cook them, and make some coffee for us. I'll pay you for your trouble."

"Of course I will, Tom. And for the eggs you needn't go out, for I've got the same in the closet; but I'm short of bread, and, if you'll buy a loaf, I'll have the coffee and eggs ready in no time."

While Tom is on his way to the baker's shop, a few words of explanation and description may be in place. First, for our hero. I have already said he was fifteen. Let me add that he was stout and strongly built, with an open, prepossessing face, and the air of one who is ready to fight his own battles without calling for assistance. His position in life is humble, for he is a street bootblack. He has served, by turns, at other vocations; but he has found none of them pay so well as this. He has energy and enterprise, and few of his comrades secure so many customers as he. For years he has lived with the old man introduced as Jacob, and is popularly regarded as his grandson; but Jacob has never made claim to that relationship, nor has he ever volunteered any information to the boy as to what originally brought them together. Occasionally Tom has tried to obtain some information, but on such occasions Jacob has been very reticent, and has appeared, for some reason, unwilling to speak. So, by degrees, Tom has given up asking questions, and has been much more concerned about the means of living than about his pedigree.

Jacob has done little or nothing for their common support, though at times, greatly to the annoyance of Tom, he has gone out on the street and asked alms. Tom, being high-spirited and independent, has resented this, and has always interfered, in a very decided manner, to prevent Jacob's figuring as a beggar....