Tom Swift and The Visitor from Planet X 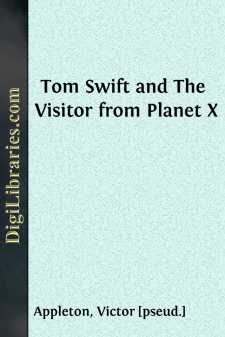 "Tom, we're having a problem with the gyro-stabilizer," said Mark Faber, gray-haired president of the Faber Electronics Company. "Hope you can find out what's wrong."

The eighteen-year-old inventor accepted the challenge with a smile. "I'll be glad to try, sir," he replied.

Bud Barclay, a dark-haired young flier and Tom Swift Jr.'s closest friend, chuckled. "If anyone can get the bugs out of your new invention, genius boy here will do it!"

The two boys followed Mr. Faber and his engineers to a wooden building which was tightly guarded. Inside, a secret rocket-telemetering device was mounted on its test stand.

"As you know, Tom," Mr. Faber began, "the usual conditions of rocket flight will be—"

He broke off with a gasp of astonishment as the whole building suddenly began to shake.

"Good grief!" Bud exclaimed. "This isn't part of your testing routine, is it?"

His question was drowned out by cries of alarm and the sound of cracking glass. The walls and roof were shuddering and creaking, and the concrete floor was heaving under their feet.

Mr. Faber and two of his men tried frantically to brace the heavy test stand which held the telemetering device. Another engineer rushed toward the door to see what was happening outside. Before he reached it, another shock knocked all of them off their feet.

Electronic equipment cascaded from the wall shelves, and a heavy-duty chain hoist came loose from its overhead track, plunging to the floor with a terrifying crash.

Bud, meanwhile, clawed a handhold on a wire screen enclosing an air compressor and pulled himself to his feet. But the next moment a third, more violent tremor rocked the building, knocking him over. "The roof! It's caving in!" he heard someone scream.

As his eyes flashed upward in panic, Bud caught a brief glimpse of the ponderous test stand with the priceless telemeter tilting to one side. An instant later it crashed over, pinning Mark Faber beneath it!

Bud threw up his arms to protect himself, but too late! A falling beam caught him on the back of the head and the young flier blacked out.

For minutes, no one stirred among the wreckage. Then Tom, who had been stunned by some falling debris, raised himself to a sitting position.

The sky was visible through several gaping holes in the roof, which was sagging dangerously on its supporting trusses. Only two thirds of the walls were still standing.

Suddenly Tom stiffened in fear. "Bud!" The young inventor had just noticed his friend lying pinned beneath a heavy beam nearby. Was he still breathing?

Disregarding his own injuries, Tom hastily freed himself from the debris and groped his way to Bud's side. With a desperate heave, he shoved the beam away, then cradled Bud's head in his arm. His friend's eyelids flickered.

"Are you all right?" Tom asked fearfully.

The answer came in a groan....