Tom Swift and the Electronic Hydrolung 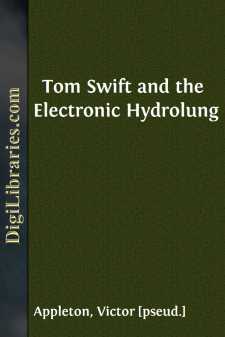 Tense, excited men gazed spaceward from the ships and planes of the South Atlantic task force. Other watchers waited breathlessly in the control room of the ship Recoverer. Among these was Tom Swift Jr.

The lanky blond youth beside him, in T shirt and slacks, shot a glance at the dials of the tracking equipment. "Eight thousand miles from this spot, Bud. It should land here in fifteen minutes!"

Tom Jr., his father, Bud, and a host of scientists, Navy officers, and newsmen were crowded aboard a U.S. Navy missile launching ship.

"Just think!" Bud exulted. "You'll have data from the planet Jupiter that no one on earth has yet been able to get!"

"If we recover the missile safely," Mr. Swift spoke up hopefully. The elder scientist's voice was quiet but taut with the strain of waiting. The two Swifts resembled each other closely—each had deep-set blue eyes and clean-cut features—although Tom was somewhat taller and rangier.

"You're right, Dad," Tom agreed. "If we don't snare the missile, our whole project will be a total loss to America's space program!"

At Tom's words, the watchers and crewmen who were crowded into the Recoverer's control room stirred restlessly. Its bulkheads were banked with radar and telemetering devices. Tension had been mounting throughout the morning aboard the ships and observation planes of the task force as everyone awaited the return of the planet-circling missile—scientists' deepest penetration into space so far.

"What do you mean, a total loss?" Bud argued. "Even if the recovery operation's a flop, the shot will still pay off in valuable information, won't it?"

Tom shook his head grimly. "The purpose of this unmanned, exploratory flight around Jupiter was to take and record all kinds of data. But none of the info is being radioed back to us."

"If we had put in radio gear strong enough to relay signals back, it would have cut down the amount of information-gathering equipment aboard," Tom explained. "We had to make every ounce count."

Outwardly calm, Tom was seething with inner excitement. Although only eighteen—the same age as his husky, dark-haired pal and copilot, Bud Barclay—Tom had been given the job of directing the recovery phase of the United States government's Project Jupiter survey. The Swifts and their rocket research staff had built the missile and engineered the space probe for the government.

"Whew!" Bud gave a nervous whistle. "I see what you mean, pal. With all our eggs in one basket, we sure can't afford to get butter-fingered with the Jupiter prober."

Admiral Walter, a tall, distinguished man, graying at the temples, smiled. "It's what we call in warfare a calculated risk, Bud," he said. "But with Tom in charge, I believe we have nothing to worry about."