Tom Swift and His Wizard Camera, or, Thrilling Adventures While Taking Moving Pictures 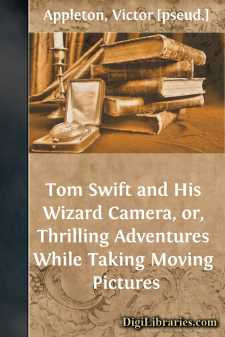 CHAPTER I A STRANGE OFFER

It was Koku, or August, as he was sometimes called, the new giant servant of Tom Swift, who made this announcement to the young inventor.

"Who is it, Koku?" inquired Tom, looking up from his work-bench in the machine shop, where he was busy over a part of the motor for his new noiseless airship. "Any one I know? Is it the 'Blessing Man?'" for so Koku had come to call Mr. Damon, an eccentric friend of Tom's.

"No, not him. A strange man. I never see before. He say he got quick business."

"Quick business; eh? I guess you mean important, Koku," for this gigantic man, one of a pair that Tom had brought with him after his captivity in "Giant Land," as he called it, could not speak English very well, as yet. "Important business; eh, Koku? Did he send in his card?"

"No, Mr. Tom. Him say he have no card. You not know him, but he very much what you call—recited."

"Excited I guess you mean, Koku. Well, tell him to wait a few minutes, and I'll see him. You can show him in then. But I say, Koku," and Tom paused as he looked at the big man, who had attached himself to our hero, as a sort of personal helper and bodyguard.

"Don't let him go poking around the shop. He might look at some of my machines that I haven't got fully patented yet. Is he in the front office?"

"That's where him am. He be lookin' at pictures on the walls."

"Oh, that's all right then. Just keep him there. And, Koku, don't let him come back in the shop here, until I get ready to see him. I'll ring the bell when I am."

Koku, very proud of his mission of keeping guard over the strange visitor, marched from the room with his big strides, his long arms and powerful hands swinging at his sides, for Koku, or August, as Tom had rechristened him, and as he often called him (for it was in the month of August that he had located the giants) was a very powerful man. A veritable giant, being extremely tall, and big in proportion.

"Be sure. Don't let him in here, Koku!" called Tom, in an additional warning, as his new servant left the main shop.

"Sure not!" exclaimed Koku, very earnestly.

"I don't know who he may be," mused Tom, as he began putting away the parts to his new noiseless motor, so that the stranger could not see them, and profit thereby. "It looks rather funny, not sending in his name. It may be some one who thinks he can spring a trick on me, and get some points about my inventions, or dad's.

"It may even be somebody sent on by Andy Foger, or his father. I can't be too careful. I'll just put everything away that isn't fully covered by patents, and then if he wants to infringe on any of the machines I can sue him."

Tom looked about the shop, which was filled with strange machinery, most of which had been made by himself, or his father, or under their combined directions. There was a big biplane in one corner, a small monoplane in another, parts of a submarine boat hanging up overhead, and a small, but very powerful, electric auto waiting to have some repairs made to it, for on his last trip in it Tom Swift had suffered a slight accident....