Tom Swift and His War Tank, or, Doing His Bit for Uncle Sam 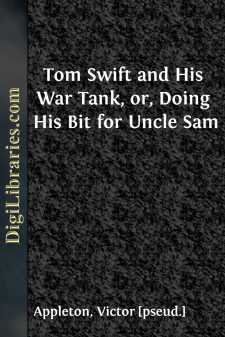 Ceasing his restless walk up and down the room, Tom Swift strode to the window and gazed across the field toward the many buildings, where machines were turning out the products evolved from the brains of his father and himself. There was a worried look on the face of the young inventor, and he seemed preoccupied, as though thinking of something far removed from whatever it was his eyes gazed upon.

"Oh, hello, Mr. Damon!" cried Tom, turning to shake hands with an elderly gentleman—that is, elderly in appearance but not in action, for he crossed the room with the springing step of a lad, and there was the enthusiasm of youth on his face. "What do you mean—my old tricks?"

"Talking to yourself, Tom. And when you do that it means there is something in the wind. I hope, as a sort of side remark, it isn't rain that's in the wind, for the soldiers over at camp have had enough water to set up a rival establishment with Mr. Noah. But there's something going on, isn't there? Bless my memorandum book, but don't tell me there isn't, or I shall begin to believe I have lost all my deductive powers of reasoning! I Come in here, after knocking two or three times, to which you pay not the least attention, and find you mysteriously murmuring to yourself.

"The last time that happened, Tom, was just before you started to dig the big tunnel—No, I'm wrong. It was just before you started for the Land of Wonders, as we decided it ought to be called. You were talking to yourself then, when I walked in on you, and—Say, Tom!" suddenly exclaimed Mr. Damon eagerly, "don't tell me you're going off on another wild journey like that—don't!"

"Why?" asked Tom, smiling at the energy of his caller.

"Because if you are, I'll want to go with you, of course, and if I go it means I'll have to start in as soon as I can to bring my wife around to my way of thinking. The last time I went it took me two weeks to get her to consent, and then she didn't like it. So if—"

"No, Mr. Damon," interrupted Tom, "I don't count on going on any sort of a trip—that is, any long one. I was just getting ready to take a little spin in the Hawk, and if you'd like to come along—"

"You mean that saucy little airship of yours, Tom, that's always trying to sit down on her tail, or tickle herself with one wing?"

"That's the Hawk!" laughed Tom; "though that tickling business you speak of is when I spiral. Don't you like it?"

"Well, I'll promise not to try any stunts if you come along," Tom went on.

"Where are you going?" asked his friend.

"Oh, no place in particular. As you surmised, I've been doing a bit of thinking, and—"