Tom Swift and His Undersea Search, or, the Treasure on the Floor of the Atlantic 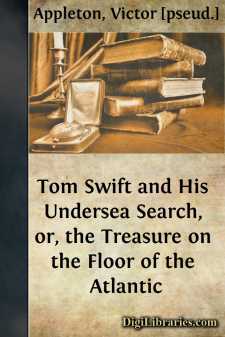 "Say, hold on there, Ned! Hold on! Where do you get that stuff; as the boys say? Has something gone wrong with one of the adding machines, or is it just on account of the heat? What's the big idea, anyhow? How many millions did you say?" and Tom Swift, the talented young inventor, looked at Ned Newton, his financial manager, with a quizzical smile.

"It's all right, Tom! It's all right!" declared Ned, and it needed but a glance to show that he was more serious than was his companion. "I'm not suffering from the heat, though the thermometer is getting close to ninety-five in the shade. And if you want to know where I get 'that stuff' read this!"

He tossed over to his chum, employer, and friend—for Tom Swift assumed all three relations toward Ned Newton—part of a Sunday newspaper. It was turned to a page containing a big illustration of a diver attired in the usual rubber suit and big helmet, moving about on the floor of the ocean and digging out boxes of what was supposed to be gold from a sunken wreck.

"Oh, that stuff!" exclaimed Tom, with a smile of disbelief as he saw the source of Ned's information. "Seems to me I've read something like that before, Ned!"

"Of course you have!" agreed the young financial manager of the newly organized Swift Construction Company. "It isn't anything new. This wealth of untold millions has been at the bottom of the sea for many years—always increasing with nobody ever spending a cent of it. And since the Great War this wealth has been enormously added to because of the sinking of so many ships by German submarines."

"Well, what's that got to do with us, Ned?" asked Tom, as he looked over some blue prints and other papers on his desk, for the talk was taking place in his office. "You and I did our part in the war, but I don't see what all this undersea wealth has to do with us. We've got our work cut out for us if we take care of all the new contracts that came in this week."

"Yes, I know," admitted Ned. "But I couldn't help calling your attention to this article, Tom. It's authentic!"

"Authentic? What do you mean?

"Well, the man who wrote it went to the trouble of getting from the ship insurance companies a list of all the wrecks and lost vessels carrying gold and silver coin, bullion, and other valuables. He has gone back a hundred years, and he brings it right down to just before the war. Hasn't had time to compile that list, the article says. But without counting the vessels the Germans sank, there is, in various places on the bottom of the ocean today, wrecks of ships that carried, when they went down, gold, silver, copper and other metals to the value of at least ten billions of dollars!"

Tom Swift did not seem to be at all surprised by the explosive emphasis with which Ned Newton conveyed this information....